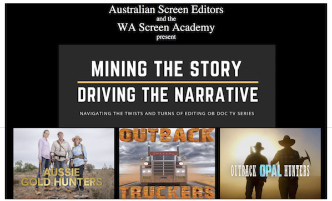 On Saturday 11th May, ASE WA ran a seminar focused on editing and post-producing Observational Documentary Television Series. The Ob Doc TV series is one of the most popular forms of screen content in the world and some of the most successful Ob Doc series on air at the moment are produced in Perth. "Outback Truckers" is now in its seventh series, "Aussie Gold Hunters" is now in its fourth season and the second series of "Outback Opal Hunters" is airing in over 20 countries.

Editing Ob Doc series requires highly specialised skills that often put the Editor in the driver’s seat, steering the narrative. The session was held at the WA Screen Academy in the new Don McAlpine Suite (named in honour of one of Australia’s most celebrated contemporary cinematographers ("Romeo + Juliet", "Moulin Rouge", "Predator", "X-Men: Wolverine"). We decided to call the seminar 'Mining The Story – Driving The Narrative' in part because we were going to be talking about two Ob Doc series that deal with mining and one that deals with driving very big trucks. But more importantly, unlike drama or scripted docos, the unscripted nature of Observational Documentaries means that Editors often have no idea what story has just been delivered to the cutting room, let alone how it’s to be told. And so sifting through the rushes for the story gems is an essential part of the filmmaking process as is massaging and steering the narrative into a coherent and dramatic story. On the panel were three of Australia’s foremost Ob Doc Editors: Meredith Watson Jeffrey, David Langlands and Robin Lloyd 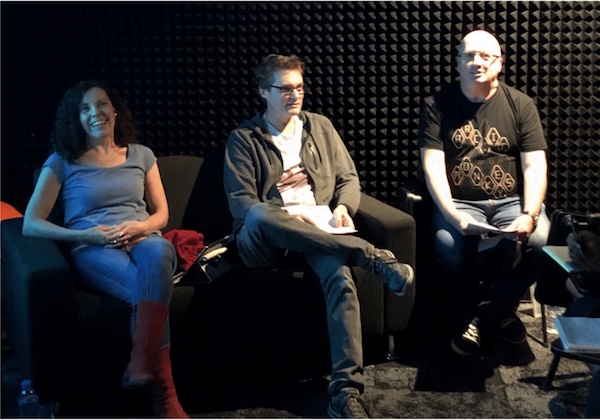 Meredith talked about her experience of editing "Outback Truckers", produced by Prospero Productions. Originally screened on the Seven Network in 2012, it currently airs on 7mate. It’s now in its seventh series and screens around the world on networks in the UK and across Europe.

Meredith started editing on popular Australian children’s drama series like "Ship to Shore" and "The Sleepover Club" in the '90s and then moved to New York where she spent eight years working on episodic television, documentary and film. She worked for Disney on "101 Dalmations" and "Doug’s 1st Movie", for NBC on "Headliners and Legends" and she worked as staff Editor for the Wildlife Conservation Society. Meredith returned to Australia in 2002 where she edited the critically acclaimed ABC drama mini-series "The Shark Net", award-winning television series "The Circuit", and "Three Acts of Murder" as well as the feature films "Big Money Hustla$", "Stone Bros.", "Blame", "These Final Hours" and "The Naked Wanderer", starring John Cleese. And most recently she was the start-up Editor on the new ABC drama series "The Heights" for Matchbox Pictures.

David Langlands talked about "Outback Opal Hunters". Also produced by Prospero Productions, the series began screening on the Foxtel Discovery Channel last year with eight episodes. This year saw the screening of another series of 13 episodes. It airs in over 20 countries including the UK and Germany. David began his career in Darwin, becoming a jack-of-all-trades in areas such as news production, commercials and promos. He then moved to New Zealand to oversee post and news production at the up-and-coming Family Television Network. David then moved to Sydney where he spent ten years in post-production with the ABC, working on everything from "Four Corners" to "Play School". In 2010 David relocated to Perth and freelanced, predominantly in documentary production. His recent credits include five series of "Outback Truckers", "Islands of Australia with Martin Clunes" and "Only In Oz" for National Geographic. He is currently working full time for Prospero Productions in Fremantle.

And Robin Lloyd talked about his experience of working on "Aussie Gold Hunters". Now in its fourth season, "Aussie Gold Hunters" (produced by Fremantle-based Electric Pictures) is the #1 Factual Series on Foxtel and Discovery Channel’s highest-ever rating local property. It’s been hugely successful around the world, screening in 122 countries to an estimated global audience of 40 million viewers. Robin came to editing after first studying engineering at the University of NSW. He took up studying film production at TAFE in St Leonards, which led to a job as an Assistant Editor at the Sydney ABC studios next door. Then a demanding four years at the Australia Film Television and Radio School earned him a Bachelor of Arts degree specialising in Screen Editing. After an apprenticeship in education and corporate videos, he moved on to editing lifestyle, reality and documentary programs for television in New Zealand, Australia and the UK. Over more than 20 years he’s worked for all the free-to-air networks in Australia on highly popular programs as well as serious documentaries for the public broadcasters. For the last four years he’s been based in Perth, editing "Aussie Gold Hunters" for Electric Pictures.

Robin described "Aussie Gold Hunters" as a hybrid of documentary and reality. Predominantly shot using two cameras with a cameraperson and a shooter/director and a sound recordist, it also has many other fixed cameras (mainly GoPro) attached to all sorts of vehicles and pieces of mining equipment. There’s also a lot of footage shot on drones that are operated by the sound recordists because it’s hard to record sound when there’s a drone in the air - although the latest Mavic drones are smaller and quieter and sound recording is possible when using these newer drones. Shooting ratios can be enormous and each 44-minute episode has an average of 2TB of rushes. 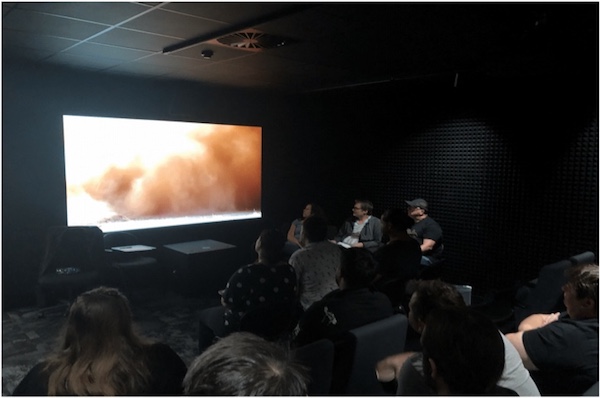 Meredith said "Outback Truckers" is shot much more as a straight Ob Doc with a narrative structure that starts at the beginning of a journey and ends at its final destination. Along the way there are always incidents that Editors can use to set up jeopardy. with cliff-hangers needed at the end of each segment before a commercial break. But even when things go smoothly, it’s up to the Editor to find ways of raising the dramatic stakes. Meredith says she uses many techniques to do this including the use of flash-forwards describing the possible dangers ahead or flashbacks to incidents that have happened in the past to the driver or on this particular route. 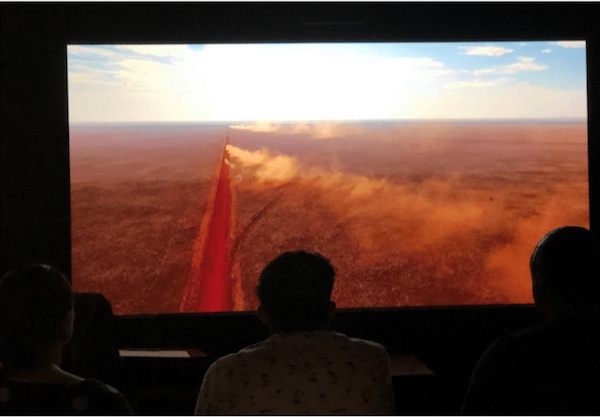 David spoke about editing the first episode of the first series of "Outback Opal Hunters". First episodes are notoriously difficult in that they not only have to establish the style of the series, but also they need to set up the characters, the location and all the background details of the subject. David said he spent many days researching opals, what they are and how and where they’re formed, and the history of mining them. This allowed him to help structure the episode and help write the narration to set up the series.

Robin talked about the Discovery story clock. Each episode of "AGH" is constructed with three stories each in five segments. So 15 chapters in a 44-minute episode means each chapter can only run about three minutes. Each needs to progress the narrative arc of the story, the character development, the objectives and obstacles while at the same time creating the dramatic rhythm of the episode using classic storytelling techniques. There are often many balls in the air during the edit and it’s up to the Editor to be a great juggler.

All three presenters said that the field director is seldom in the cutting room during the editing and it’s up to the Editor to construct the documentary using field notes and the rushes at hand. Robin said he is employed by Electric Pictures as a 'preditor' (a term used in the UK for a producer/Editor). Preditors don’t work with post-directors and take on both the role of the post-director as well as the Editor and liaise directly with the series producer. Meredith and David both said they work in a similar way. They work autonomously, constructing the narrative, writing first draft narration and liaising directly with the series producer. Each said that the first job of editing the Ob Doc was to watch ALL the rushes. Doing this at speed could take up to a week. "Aussie Gold" has an eight-week edit, while "Truckers" and "Opal Hunters" both have seven weeks to edit. All the presenters said they viewed all the dialogue-related rushes at speed because they needed to hear what was being said. However, action only sequences could be viewed at high speed. As they watched the rushes, each Editor would extract key elements of the narrative and create a timeline that might be up to three hours long.Then it’s up to the Editor to construct the episode in consultation with the series producer, who has an overview of the entire series in relation to character story arcs.

The panelists spoke about the need to construct the soundtrack as they constructed the picture edit. All three series use production music as there is usually neither time nor budget to compose a score. So this is one more important job for the Editor of Ob Doc series. Robin said he doesn’t cut with music until rough cut because he prefers to let the drama of the scene dictate the rhythm of the edit rather than the music. Ob Doc Editors also need to deal with VFX and CGI elements such as maps and counters, and it’s often the Editors who deal with the VFX houses and graphic artists while doing this work. 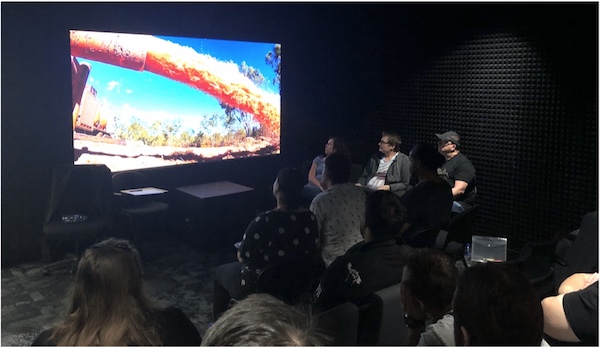 While Ob Doc Editors often write the first draft of the narration, it’s the series producer who usually does the final polish to maintain consistency of style across the series. However, when they work well, Editor’s lines of narration will often be used unchanged. Meredith took out the prize at Prospero for the best line of narration for an episode of "Outback Truckers" starring a driver named Yogi who was having a particularly difficult time of it. In one scene, he buries his face in his hands in despair, and Meri wrote the classic line, “How much more of this can Yogi bear?”!

There were 30 participants at the seminar, which ran for three hours but could have gone on all day. Everyone commented about how much they appreciated ASE presenting the seminar, and we’re looking to running more in the coming months looking at editing TV drama, feature drama, documentary and other forms of screen content. 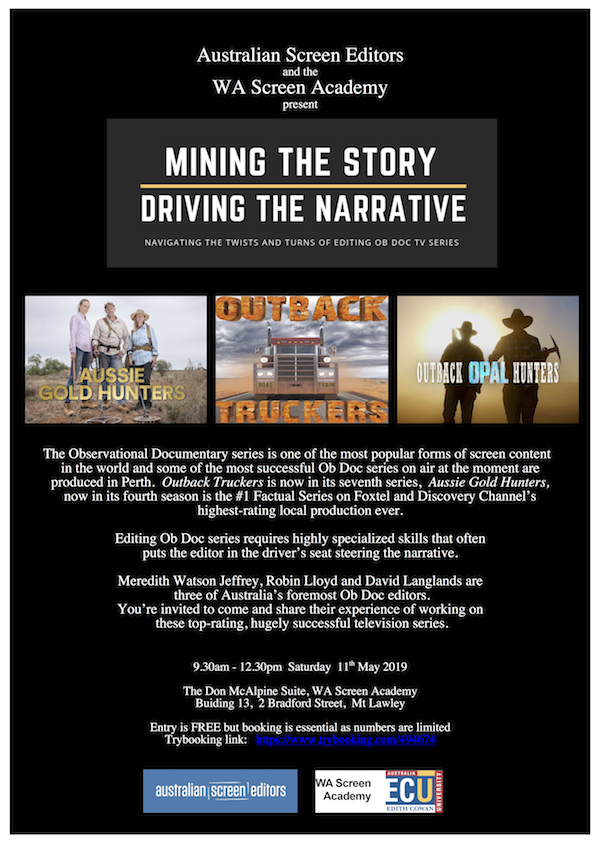