On a very brisk Saturday Melbourne morning the Victorian College of the Arts hosted another ASE event to a packed crowd of over 90 participants. It had been a long time coming. The Assistant Editor Workshop had been delayed from last year due to COVID-19.

Mark opened the event by welcoming Kathy Freeman. Kathy had worked in the industry for almost 13 years. Her credits include high profile feature films such as 'Peter Rabbit 2' and 'Mortal Kombat', and TV series 'Spreadsheet', 'Hardball' and 'Clickbait'. She started out editing TV commercials before moving to Melbourne for an Assistant Editor position on a drama series. For several years she worked as worked as an Assistant and was the VFX Editor on the award-winning film 'Hacksaw Ridge'. From there, she began to focus on assembly editing and that led to her first break as an Editor on the kids show 'The Investigators' in 2018. In the last three years Kathy has been hired for a mixture of editing, VFX editing and assistant editing roles, and is currently working in Sydney.

It is very rare in the industry that you find an Editor when speaking to a large audience has the confidence, is articulate and captivating all in the same time. Kathy was one of those people. As she spoke of how the industry works she got the audience asking questions, and rewarding them with gifts from our sponsors from Avid which included mugs, mouse pads and an Avid subscription, thanks to Shauna Purcell and Pip Warren. Kathy explained the four stages of film-making. (Development, pre-production, production and post-production.) She introduced the role of 1st, 2nd and 3rd Assistant Editors and their roles in an Avid environment.

Mark then introduced Peter Millington. Peter is a former Editor, post-production supervisor, line producer and producer of such hits as 'The Secret Lives of Us' and 'Winifred'. He had been responsible for the delivery of hundreds of programs to international standards. Peter, along with Editor Peter Carrodus ASE, founded Blue Post, a boutique facility that was focused on the requirements of long-form producers. 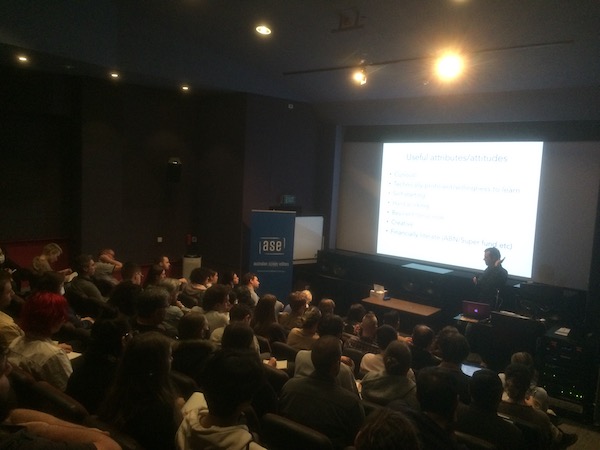 Peter started the talk with a brief background of how he came into the role of post supervisor. As a Editor on his first Avid project, it was all new and daunting, and his big move into post supervisor was by chance and just having the confidence to learn on the job. His honesty in telling his story would motivate others to have a go and get themselves into a job where it can be more creative and rewarding.

Peter gave an overview of the post-production process, online, offline and online colour grading, and where Blue Post fits in. Peter has generously made available his Melbourne facilities for the follow-up practical Assistant workshop later this year.

Next up was Ariel Shaw, who is a graduate of VCA and an ASE award-winning Editor. An in-demand Editor, her credits include the Stan Original series 'Bump' and the ABC/Netflix comedy series 'Why Are You Like This?'. Ariel discussed how she got her start in the industry and the need to standardise the workflow in Avid. With the help of the huge cinema screen she was able to project her laptop with a practical set up for an Avid project for day one Assistant Editor right through to Avid projects for other Assistants and Editors. Also she discussed the permissions protocols needed for each Assistant and Editor to use certain files. 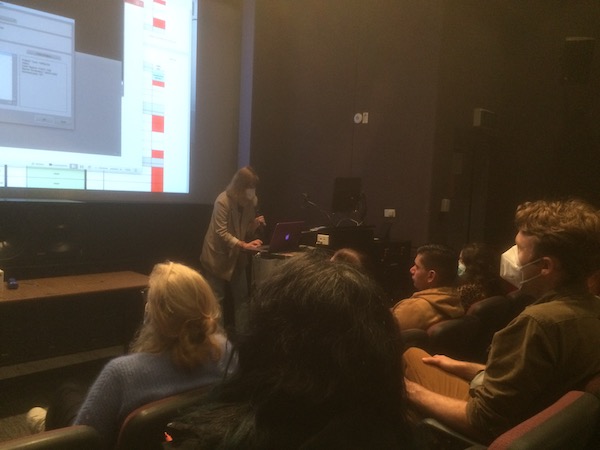 (Ariel Shaw : Showing the Avid workflow in detail from projects she opened and loaded.)

After that it was back to Kathy to set up project for VCA footage - importing a vision clip to show MXF files, importing audio, sync and check time prep bins for the Editor.

After a lunch break, Kathy returned to opening a project for 'Clickbait', showing MXF vision files as delivered from the post house. With imported sound she labeled the vision from continuity and checked sound and sync. Kathy discussed tricky clips off-speed and no time-of-day timecode, and how to get around this. Other Assistant Editor tasks were discussed (one-liners, goof reels, recording temp VO, getting coffee, lunches, sending out dailies, exports, marking up VFX, temp VFX compiles, SFX passes and assembling.) She also gave practical tips on how to get started in the industry - networking, talk to the post supervisors and Assistant Editors at this event.

There had been lots of questions throughout the day and it was great to see that the questionnaires were filled out so that we can work through your needs and what our next event will focus on. 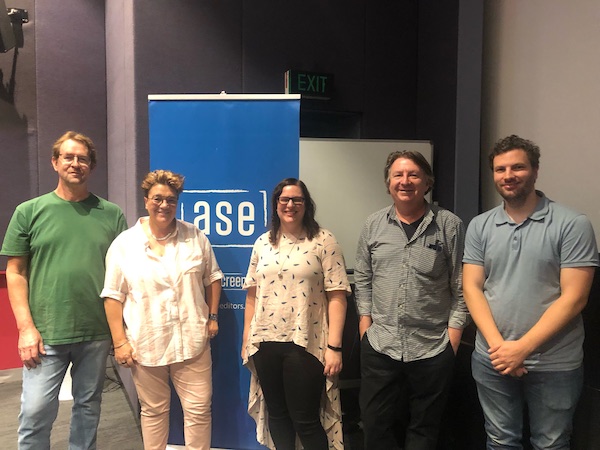 Also thank you to VCA; Andrew O’Keefe - Head of Film and TV, who gave us access to Cinema 2 at the film school, and lecturer Natalie Cunningham, who gave us logistical support.

Remember that these people give up their time to help give you a better understanding of the challenges of your role in an ever changing industry. Please support your guild, and we hope to see you at the next workshop.  Watch this space.