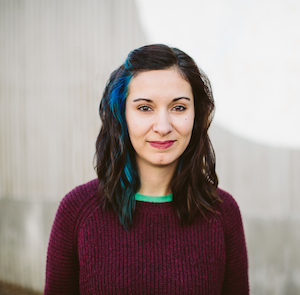 For the past nine years Krystle Penhall has worked as an Editor and Assistant film Editor across both live action and full CG television and features. She currently works as a VFX Editor with Mill Film in Adelaide.
The ASE asked Krystle to reflect on how she broke into the industry, the lessons she’s learned along the way, and what she thinks it takes to be a great Assistant Editor.

How did you first become interested in becoming an Editor/Assistant Editor?
I remember loving my first film when I was around five years old. The film was "The Little Mermaid" and I still remember the moment my mum handed me the VHS tape and I hugged it. I specifically became obsessed with picture editing when I was first exposed to it in middle school. I then pursued it all the way through high school, and up to getting a Masters at university. I got my first job six months after graduating university. A contact recommended me to a new boutique production company in town. I interviewed for an editing job there, and to my utter surprise, got it. While there, I cut my teeth editing corporates and television commercials. I stayed at this job for two years before leaving for a bigger challenge.

How did you get your current job?
I planted the seeds to get my current job around two years ago. When you pivot from one segment of the industry to another, it can take some time to build new networks and find the right opportunities. I chose my current job because the company openly and actively cares about diversity and inclusion, which is very important in general, but especially important to me. Once I had laid the groundwork to get my current job, I applied for a more senior role online that I wasn’t quite qualified for yet. This gave the recruitment team an opportunity to know I existed, and for us to do an informal phone interview. I didn’t get that senior role, but when something came up a few months later that did suit my experience better, I simplified my CV and applied again. Since the recruiter already knew who I was, things moved pretty quickly after that. I did an interview on-site and signed a contract shortly after.

What personal qualities are important for an Assistant Editor?
Don’t panic, be detail-oriented, be proactive, be nice, be a good communicator. While knowledge of tech is ,of course, necessary, it’s never the most important thing.

What are the critical things you need to know as an Assistant Editor?
While it is important for Assistants to know how to use the common non-linear editing systems, the most important things are to know how to communicate effectively and listen well. It’s also good to understand how films are made, and the role that each person plays within that collaboration.

What has been your biggest challenge of being an Assistant Editor, and did you overcome it?
The biggest challenge of being an Assistant Editor for me was learning to say, ‘No’. When you’re young and passionate about editorial, you don’t yet know that people will take advantage of those things. You can easily fall into the yes-trap and, consequently, burn out. It took me three severe bouts of burnout to learn that I’m the only one looking out for me at work, and creating boundaries is the only way to protect your health. Protecting your health means protecting your greatest asset: your creativity. I’m not perfect at it, but now I make all job decisions with health as the highest priority.

What are the main pieces of software and hardware you use?
The main pieces of software and hardware I use in editorial now are: Windows machine, Linux machine, a couple of monitors, a vertical mouse, Atom (to code), DaVinci Resolve (colour and transcode), a standing desk and topo matt (so I don’t fall asleep in the afternoon!), Avid or Premiere Pro (whatever the show requires), and excel/shotgun/proprietary tracking system (depending on the show).

From your experience, how do cutting room structures and teams differ from production to production?
The basic mechanics of a feature film cutting room doesn’t change from show to show. The same essential tasks need to be performed, and the same roles need to be filled. The biggest difference for me has been going from working on low-budget independent films to working on high-budget studio films. Higher budget films have more work that needs to be done, so there’s usually a larger department. This is how I prefer to work, in a highly collaborative environment with a big editorial team. Having a larger editorial team also allows for junior Assistants to come on board and receive training and mentorship from Seniors or First Assistants. This is a great type of environment to be in.

Who have been your mentors and what are the most important pieces of advice they’ve given you?
Mentors have been extremely important throughout my career. I’ve never had an official mentor in the industry, but I’ve had a few great unofficial mentors; some I’ve reached out to proactively, and some who I’ve met through a colleague. I will be forever grateful to my mentors, all of whom have granted me access to rooms/studios/conferences that I never would’ve gotten into were it not for them. I model my mentorship work in the post community on their kindness and openness. In an industry where advancement is so heavily dependent on relationships, mentorship still remains vital for us all.

Is there anything you would have approached differently at this point in your career?
It’s hard to say whether I’d change anything because you're always learning things along the way, but I would change how hard I was on myself during the early stages of my career. When you’re just getting started, it’s a good idea to stay grounded and patient. The most important thing you can do is to show up every day, the rest will happen. That’s what I’d tell young me. Also…move to Vancouver as soon as you can!