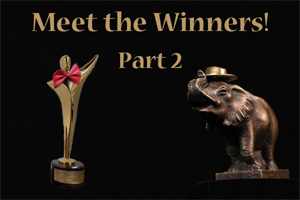 On Sunday 28th March, we had the opportunity to gather winners of the 2020 Ellie and AACTA awards from all across Australia, for Meet the Winners! Part 2. 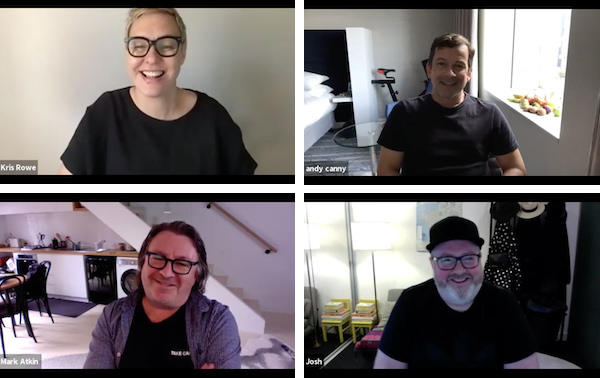 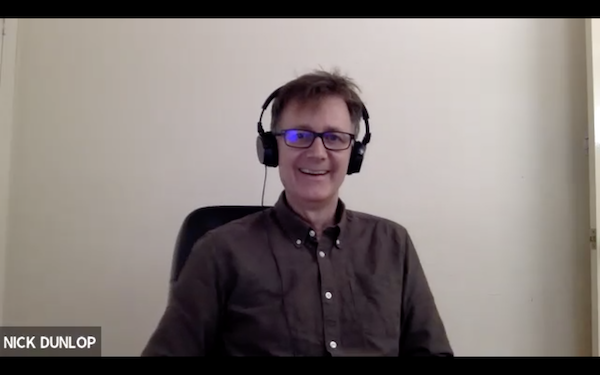 To kick things off, we heard a little on how each panelist first became Editors.

Kris Rowe studied piano and 21st century composition at the Conservatorium of Music in Melbourne. It wasn’t until she had the experience of cutting pictures to music that she had her self-professed “revelation”, prompting her continued exploration of cutting rhythms. After completing her course, she approached all of the post houses in Melbourne, before finding a home at Mike Reed’s. She started working there as an Assistant, where within her first year she was editing and received her first editing award. A seminal moment was getting the opportunity to work with Jill Bilcock ASE on Moulin Rouge. From there she moved to Sydney, and the rest is history.

With a background in writing, editing and post production, Josh McAtamney made the move from Brisbane to Sydney, where he worked as a reality TV producer for 10 years. He worked on big Australian shows like 'MasterChef', 'My Kitchen Rules', and 'The Farmer Wants a Wife’, wearing various hats as a post, field and series producer. After deciding he wanted a life change, Josh moved into factual television, creating and reimagining formats for the ABC. He joked that when he was a post-producer, he “recognised where the real talent was in the room” and was determined to get back on the tools. In 2019 Josh had the opportunity to join SBS’s 'Dateline', working as a Producer/Editor on weekly, international current affairs documentaries - and hasn’t looked back.

Mark Atkin ASE studied at Swinburne University in the '80s, and loved editing during his time there, but didn’t necessarily think of it as a career. Straight out of university, his first jobs were as an Assistant Editor. He assisted on 'Moving Out', Vince Colosimo’s first film, and received on the job training with people like Tony Paterson ('Mad Max', 'Phar Lap'). Mark became a "jack of all trades" also doing writing and sound recording. This all ultimately coalesced into a decision between pursuing either the writing or editing path. He was offered an editing job on Virginia Rouse’s feature film 'Seeing Red', and discovered he loved editing for other people, writing for himself. The decision was made. Maybe a bit by accident, maybe serendipitous, he focused on editing. During his career, Mark has always oscillated between drama and documentary.

Andy Canny started out studying art and design in Melbourne. He had always loved the combination of technology and creative, getting the opportunity to exercise both parts of your brain. Editing was the perfect example of that crossover. Finishing his course, he volunteered on film and TV sets, after whatever experience he could gain. A freelance camera operator he was working with bought a Media 100 system and Andy started to teach himself how to use it, often going in to practice at night. Gradually, he moved into the edit suite, primarily working on commercials. He worked at Mike Reed’s in the late '90s, where we discovered there was a crossover with Kris. He really wanted to move into drama and documentary, but was finding it difficult to get the opportunity, so went back to study at AFTRS in 2000. He was there for a year, using it as an opportunity to hit the reset button. Afterwards he helped set up a small production company that produced short films, music videos and commercials. One of the first drama opportunities Andy had was working on 'The Secret Life of Us' with Cate Shortland. Then 'The Slap', alongside Mark, was his big drama break. Since then it has been more and more features.

Nick then delved into the intricacies of the Editor/director relationship, asking about their personal philosophies. Is it better to be agreeable or confrontational?

Mark said it comes down to a bit of both. In the past, he learned from making some mistakes, accidentally saying something indelicate and getting people offside. He said once you get to know the people you’re working with you gradually find a way to navigate through everything. You have to know when to listen, take stuff on board, and redirect your own ego. Also know when to give people a reality check when things aren’t working. Ultimately, he said, good Editors are like psychologists.

Kris agreed whole-heartedly, adding that as well as being psychologists we are translators. She expressed her changing view on this over the years. She confessed that early in her career she was more confrontational, so passionate in her viewpoints. She then went through a period of being more passive, and ultimately has developed her own voice when it comes to relationships with directors. It’s about humility and the art of letting go.

Josh added to what both Kris and Mark had to say with one of his more significant lessons learned; “listen to someone’s problems, not their solutions.” Meaning, listen to the root cause of someone’s feedback or problem, not necessarily what they’ve suggested to do about it. This adage resounded with everyone.

Nick then delved into the specifics of each award-winning project. He commented on the controlled visual style and pace of 'The Invisible Man'. Nick was interested to know if the film was heavily storyboarded, and if so what effect did that have on the edit? Andy revealed that some sequences were, but in fact not a lot. Director Leigh Whannell and cinematographer Stefan Duscio went to a lot of the locations and lensed up to get a feel for everything before the shoot. They would then send things to Andy to talk through the coverage. Whannell wanted to cover a lot of things in one shot, therefore pre-vis was extremely important to check that all the story points were comprehended. The three had previously worked together on Whannell’s first feature film 'Upgrade' (2018). This was significant, as there was trust already established, and also meant Andy was involved in the early stages of development.

Nick wanted to hone in on a particular scene in the 'Dateline' episode ‘Human Cargo’. He was interested to hear about the process of cutting the first rescue scene, which seemed to consist of few cutting points. Josh told us that there was only one Go-Pro shooting coverage for the entire first scene. The single shot was 45 minutes long. He had to think of a way to tell the entire rescue story in only 6 cuts. He utilised titles in between the shots, which also had the benefit of doing some heavy lifting for the story. He said of all the scenes in the episode, the most work went into that sequence. It was the very first thing he cut, then came back to again and again, revisiting it for an hour a day over the course of the 3-week edit. Overall, there was a staggering 150-200 hours worth of footage, with no shooting script, so he had to develop the story through watching his rushes. He described the difficulties of the writing process, the enormous task of trying to condense such a huge geo-political humanitarian crisis.

Kris explained that early on she had the idea to cut the music video for ‘Wasteland’ by Mick Flannery like a short film. It was almost an anti-music video in many respects; forgetting about the rhythm of the music track, and utilising really long takes. She wanted to push the narrative and use strong sound design throughout in order to break the form. She said sometimes in low-budget or free projects, you get the opportunity to explore more. You have a lot of creative licence, which was the case with this project. The proof is in the end result.

Nick was interested to hear about the process of cutting the Eisteddfod scene in 'Stateless'. It was a complicated scene in terms of both story and technique. Mark explained how there were a lot of complex emotions going on for all the characters in the scene. He revealed that he started assembling the scene as a performance piece, trying to get the coverage working. It was from there that he decided who needed to be focused on strategically at what point. The sense of connections between the looks wasn’t working at first, so he gradually built that in more and more. He spoke of the joys of cutting such extraordinary performance and deciding where to pepper reactions throughout. Ultimately, the scene itself didn’t change that much from his first assembly.

With time nearing, we moved onto final questions. Nick asked if any of the panelists would give their younger selves a piece of advice. Kris said to get your ego out of the way. As her level of emotional maturity has developed, her editing has been strengthened.

Timothy Hadwen from the audience asked if any of guests had experiences with audience test screenings. Did they shape the edit in any way? Mark said that during the edit for 'Stateless' they shared the cut with the "inner sanctum". It was only once he started to notice cross-overs in opinion that he thought it was worthwhile investigating. He remarked that during a test screening for episode 1, someone commented that the structure was "too confusing", which was something that had been playing on his own mind. As a result, they made the story more linear and did some simplifying. It was a full-circle moment as everyone once again found relevance in Josh’s comment; “listen to the problem, not the solution.”

A huge thank you to Nick Dunlop for his thoughtful questions, which allowed for a fascinating session. Thank you to Alison Myers for organising, and Andy Canny, Mark Atkin ASE, Josh McAtamney and Kris Rowe for participating. It was an insightful event enjoyed by all.

(The video for Meet the Winners! Part 2 will be online soon. Keep an eye on the website. It will also be well worth watching.) 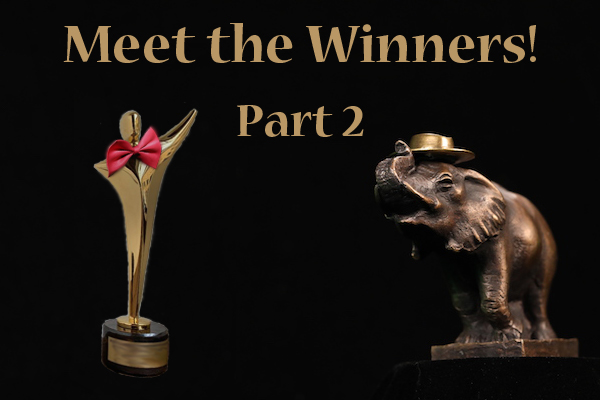 The Zoom session will be hosted by Western Australia Committee Chairperson Nick Dunlop.

RSVP to office@screeneditors.com.au by Friday March 19 to receive the Zoom link.