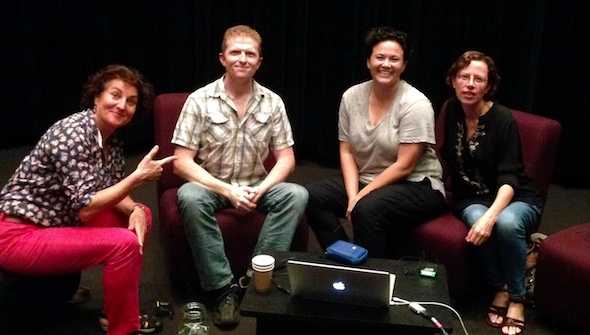 Every time I walk into the AFTRS theatre I always stare lovingly at the old brick wall that’s on the right as you walk down the long hallway to the entrance. It’s the only remaining piece of a show ground building that was demolished to make way for the new AFTRS building that was built in 2005/2006. I always try and remember what it was like going to the Royal Easter Show when it was at the Fox Studios site and all I can recall was going on the chairlift a lot and also having a quota of 4 show bags each year and being very very scrupulous about which bags got a green light.

Tonight I’ll choose to forget the contents of the Cadbury or Coke showbags (perish the thought – sugar filled rubbish – I always wondered why in Requiem for a Dream they talked about “the white death”.

I’m at the AFTRS theatre for the first of this years ASE’s “Editors on Editors” series with Deb Peart ASE talking about her work on the recent ABC series The Code and alongside Deb is Matt Villa ASE discussing his edit on the recent Spierig brothers film Predestination.

On stage asking the questions is Jane St Vincent Welch ASE and also Dany Cooper ASE. The night begins with both Deb and Matt showing a clip from each show and then asking how they came to be involved in each project.

Deb shares how she doesn’t use an agent and relies on work coming to her through recommendations. She’d worked with The Code's director Shawn Seet for the first time in 2007 on a series called “Dangerous” and since then they’ve worked together every year sometimes even twice in a year. Deb said the fact that Shawn use to be an editor himself was a good thing and how that positively impacts his choices whilst directing. Deb is mostly left to her own devices in the early stages and Shawn will let her find the slates herself (also using production notes/paperwork) before they head into the rough and fine. Matt talks about how he met the Spierig brothers when both Peter & Michael walked into Spectrum Films in 2008 to discuss him editing their 2nd feature film “Daybreakers” and he now considers them good friends as well as colleagues.

The discussion then moves to how long they had for the edit of each show. For The Code Deb had 3 months of assembling whilst production was happening and then 14 weeks to edit all 6 x 1 hour episodes. For Predestination Matt had 6 weeks of assembling down in Melbourne during the shoot and then he moved to Brisbane for 12 weeks of rough and fine cut thru to the lock.

Throughout the night many topics are discussed. Deb talks about some of the innovative VFX & graphical treatments that were used in The Code and how they came about. One scene in particular showed the main character on his laptop shot at 45 degree’s from front on (as a mid shot) with his head in the

(screen) right of frame. In the empty space on the left of the characters face almost floating above the keyboard you could see the contents of his laptop’s screen populating the frame. So you would see a map fade up, then a police report, then a web browser opens, then an email window with typing and so on. This was brilliantly executed - a great way to deliver story information to the audience.

Matt talks about the unique experience of working with twin brothers, Michael and Peter Spierig and how they really are of one mind. So unified is their vision of the film that one would often start a sentence while the other would finish it but the result would be one very clear idea.

At about 6 weeks into the rough cut Matt, Michael & Peter invited some close friends and colleagues to a screening of the film in its current state – Matt and both directors were so immersed in the material they needed some informed feedback to help iron out story points that notoriously become harder to detect. When deep in the edit of any longform job there is the battle of constantly trying to walk the line of “maximum work rate to meet schedule” versus “I need fresh eyes as often as possible” that can become more and more difficult as time rolls on.

Jane asks about the studio’s involvement in the film during the edit. Matt says that the studio (Sony) were very much “hands off” during the cut and the only thing they asked after were a few shots from various scenes, to allay any fears that Sarah Snook could pull off a believable male character once she had made the on screen transformation. Apart from that Matt & the twins were relatively free to make the film they wanted.

Deb also spoke about how staying true to the directors vision is paramount for her and ensuring that key creative ideas & new interpretations constructed in the edit by herself & Shawn, weren’t diluted over time by simplifying story beats and concepts to “predict” the capacity of the audience to follow the narrative. Bravo.

Deb said they (the creative team behind the show) made a conscious decision to make it stand out from the crowd and place it alongside many current American (serial) TV drama. The Code contains some scenes and production values that (on scale) along with a tight narrative structure - push the way forward effortlessly for what Australian series TV can be. Bravo again. And there are some great locations to be seen in this show.

Jane then asks how they each created mood whilst editing as both shows clearly exhibit their own distinct feel. Matt says how he always likes to temp music once a scene is standing on its on two feet (picture wise & structurally). Like most good picture editors Matt will only start to lay temp music into a cut once it is playing well enough, and then simply keep trying various temp to match, amplify or even run against the picture. Once the temp feels like it’s a good fit for the chosen scene then rough or fine cutting can continue. So Matt sets the mood very much himself early on in the offline. Deb also likes getting as much temp music in scenes as possible. All her cue’s were beautifully expanded upon by series composer Roger Mason and he lifted the show to a whole new level in Deb’s eyes.

And a general point about music from any editor’s perspective is the placement of it is always very considered. Any time a cue is moved subtracted or added without the editors consent can be a ghastly moment to witness months down the track whilst watching at home or online or in the cinema.

Matt also mentions how Peter Spierig was the composer of the film this time around too. One word. Wow. That’s like the German football team turning up to the 2018 World Cup and saying “hey we made these soccer balls on the plane trip over we had some spare time, wanna try them?” An edit day on Predestination would run something like this: Matt & the twins would all get together at the start of the day and discuss the scenes under edit. Peter and Michael would then head off down the hall to compose and also work on various VFX elements (Micheal Spierig still does some of the VFX work himself on his films, as in operates the box and works on shots that will be in the finished film, another soccer analogy maybe? Actually that’s because when you start you need to do everything yourselves. It’s a good model. It’s neat that these guys still do it. I’m sure the American Studio’s secretly love it. The brothers then return to the edit suite to watch what Matt had achieved during the course of the day and review. This was a reasonably similar template for most days whilst working towards the lock of the film.

Deb spoke about the pace she must cut at. Having 14 weeks to finish 6 TV hours is no easy task as weeks race by very quickly in an edit suite. That’s a lot of editing. Getting a small to medium sized film done in 14 weeks is impressive enough in the post 16 & 35mm shoot ratio worlds we now find ourselves in. 6 finished hours is a lot of work. Like a lot. Any switched on producer out there looking around you’d be in safe hands handing a film to Deb, she’d walk it in.

Also on occasion Deb would have to go to the shows producers and ask for adjustments in the schedule and delivery of edits as the work load called for it. Often dealing with up to 4 cameras on some scenes (A cam, B cam, C cam & D cam) Deb emphasised how she must be very confident on the best way thru a scene, as time didn’t allow for much second guessing. This is a skill only a very experienced picture editor will have. When watching rushes for the first time (daily as they arrive) Deb would be logging in her mind a best Plan A, with a few Plan B options and even a Plan C route for any scene if called upon. Other times you have no idea and just start putting shots together. Obviously some scenes will only ever have one or two “best ways through” whilst other scenes will stealthily present new options once you get deeper. Any editor will always have a great memory and a great eye to prompt those memories.

Mat spoke about 2 scenes in the film which (by themselves) were slow and struggling. He had the idea of blending them into a single scene by cross cutting and that made all the difference. Matt plays this scene from the finished film and its works very well. Dany says how there is almost one scene in any film which stays either completely untouched or virtually untouched all the way from the assemble through to the picture lock. Matt concurs that this scene was that scene from the film.

Deb then mentions that whilst principle photography was happening the most difficult thing was ensuring the story beats and character development was flowing and building in the correct order, as the shooting schedule was all over the place. And they wouldn't be able to go back and pickup things once they wrapped. When editing drama especially, Deb & Matt would become acutely aware of where each character should “be” emotionally, mentally and physically at all stages of the story arc and if the actors don’t match that in every scene as per the story point they are currently laying down, scenes and performances can become liabilities in the edit suite and you ideally never want too many to be.

It was a good night and zipped by effortlessly. A sign of great work is the moment they dim the lights you are right there. Look out for the 2nd Instalment of the ASE’s “Editors on Editors” program - which will run middle of this year.