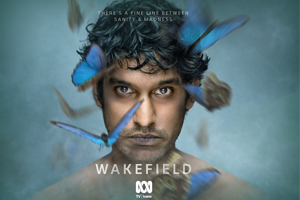 “'Wakefield' is at once a riveting psychological thriller, a study of the human condition, and a light Aussie comedy. It's unlike anything we've seen on our screens before and hopefully it's an indicator of where Australian TV is heading.” Mamma Mia

"One of the finest Australian TV productions this century. A masterpiece. ✭✭✭✭✭" The Guardian

Two of the key creatives responsible for bringing this remarkable show to our screens are Gabe Dowrick and Nick Holmes ASE, and I had the good fortune to talk to them about their experiences cutting 'Wakefield'. And for the uninitiated, spoilers below!

After reading the pilot, Gabe actively pursued the job because it combined so many different styles and tones, which is unusual for Australian television. He was drawn to the audacity of the end of the first episode, where a young mum appears to push her daughter’s pram into the path of an oncoming train, and then breaks into a joyful tap dance.

He went on to talk about his approach to scripts generally, asserting that he doesn’t read scripts with a fine-tooth comb; rather he takes a general impression and waits to see how it comes alive in the rushes.

Nick had meetings with the showrunners and was offered the job before he’d had the chance to read any of the scripts. In fact, he ended up reading the entire series on an iPad during a return flight to the U.S. Initially worried about the repetition seen in the crossovers in the script, he (and Gabe) were able to reveal something new in each crossover during the edit process.

There were of course challenges combining all the elements - comedy, drama, mystery, dance, flashbacks - but the greatest challenge was in finding an overall tone that made the piece cohesive. The chance to experiment with a piece as tonally and structurally atypical was one they welcomed.

Both Nick and Gabe went on to comment that music really helped tie things together… Which was quite synchronistic as we were lucky enough to have 'Wakefield' co-composer and musical director Maria Alphonsine in attendance, and promptly brought her into the conversation.

Early on in the process, they worked with score from 'Moonlight'as temp, along with having some pieces from Maria to work with. She provided stems, which allowed great flexibility. And it should be said that Gabe and Nick’s expectations of the score were vastly exceeded by the incredible work of the composers – Maria and Caitlin Yeo.

The fun and challenge of finding an editorial style or tone when starting a new series is something that greatly appealed to Gabe. He enjoyed having the opportunity for editing imprimatur before the network got involved. The tone was also obviously informed by the shooting style and performance. 'Wakefield'  has a large cast and the actors made interesting offers all along the way, which was great to play around with.

In terms of process, Nick and Gabe have very different approaches to rushes and continuity – with Gabe taking a more of a improvisational approach, where Nick favours writing notes on scripts as he watches rushes.

One of the most important – but also tricky – elements of the show to manage was the flashbacks. The intrigue that drives the show is contained within and they were shot over a period of a few weeks by director Kim Mordaunt. There was a wealth of material to work with and scatter through the series. Both Editors were conscious of neither overdoing nor underdoing them and although the scripts were very carefully structured and adhered to, it was a delicate balancing act that required massaging throughout the cutting of all eight episodes. They were conscious of keeping the mystery alive, while not annoying the audience by teasing it out too far, losing their interest or confusing them. Or by giving away too much and letting the audience get ahead of the narrative.

The actor playing the central character of Nik, Rudi Dharmalingam, provided great range in performance, capable of giving something big when required, but also subtler options where appropriate. Gabe and Nick kept his performance restrained in order to earn the more emotional moments.

Throughout the process, Gabe tended to use the bigger takes to start, the nto strip back, and he talked about how tough that can be at assembly stage. Often the weighting of a performance only becomes clear when you see the whole episode.

Coming back to the crossover moments in the narrative, the tough part was making it clear you were seeing the same moment again from a new perspective, rather than having them appear to be new separate scenes.

Gabe was particularly conscious of this in the set-up of episode 1. In fact, the success or failure of the structure depended on it.

Consequently, he used different shot styles or lensing choices to illustrate small differences between perspectives in different chapters. He, set-up director Jocelyn Moorehouse, and showrunners Kristen Dunphy and Sam Meikle talked a lot during the post process about subjectivity and finding balance by staying with one character.

Nick’s episodes tended to have a different approach to the crossovers, where rather than a new perspective being illustrated, more information was revealed. Scenes might start later and reveal what happened after we left the previous crossover.

As mentioned, sound and music are essential to the show, and unusually Maria was involved in development. During the writing process, she came up with different iterations of ‘Come on Eileen’ to show how varied the track could be. She developed ‘Nik’s theme’ during early the pre-production workshops, and this informed the cut of the opening of the series. She was also musical director, so she was on set for all the musical numbers.

Director of episodes 4, 5 & 6, Kim Mordaunt, asked for some musical textures during the edit, so they created a library of textures and themes with different variations of the melodies. After the COVID lockdown, Maria also provided what Gabe called "torn out snatches" of music which were a little more abstract and allowed freedom of expression in the cut. Both Nick and Gabe talked about how incredibly useful it was to have access to all these tracks, stems and elements. It was mutually beneficial to work this way.

Both the composers and the choreographer, Chris Horsey, would see cuts of the dance sequences and feedback when the dancers were off beat. Gabe talked about wanting everyone’s work to look great, and how helpful it was to have someone looking at that detail. They all talked about the extraordinary sound design for the show from Sam Petty, and how it elevated both the vision and the score. Gabe really felt the final product was so much better than he anticipated – he was surprised and delighted by the design.

An unintended benefit that presented itself was the COVID shutdown. Wakefield was two weeks into the shooting the second block when everyone was sent home… Including the Editors. And Gabe for one enjoyed ‘bediting’ - cutting from bed.

Ultimately, it also allowed more time to interrogate the material, and a show of this complexity benefited as a result. Including being able to pick up some material for the first block once production resumed.

We discussed how the show’s content - and the COVID lockdown - might impact the crew’s own mental health, and Nick and Gabe related that seeing actors making people laugh as soon as the scene finished, the joyfulness of the dance sequences, and the comedy elements all helped mitigate against the impact of the darker material.

Any difficulty during this period came through the challenges of communication. It meant a lot of emailing and uploading, but creative conversations are so much better when you’re in the room together and can spitball solutions in the moment. A lot of time was spent writing emails and deciphering tone. We agreed that it’s hard to write good notes that make everyone feel creatively engaged. Nick points out that there’s an art to writing notes that don’t crush the recipient!

'Wakefield' has been the highlight of Gabe’s career thus far. The last episode, in particular, was expansive and interesting, with the flooding bathroom sequence being "an Editor’s scene" to play with.

Despite some initial fear from the ABC around the dance sequences and structures within the scripts, once they saw the edits, they were on board. In the end, they said it was the best last episode of anything they’ve ever commissioned. 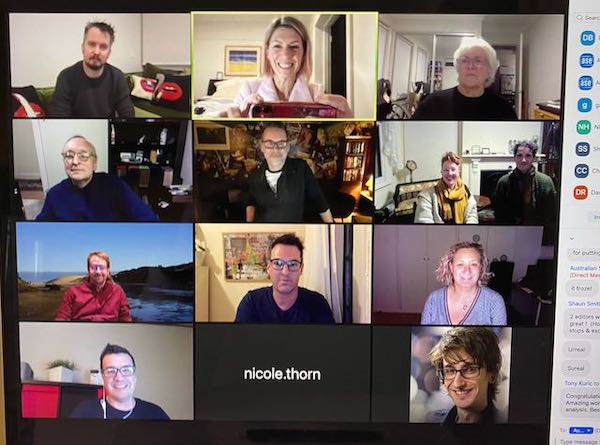 Huge thanks to Gabe and Nick for their time and insight. I really enjoyed the conversation and the company and I know our small but dedicated audience were thoroughly engaged.

Thanks also to Maria Alphonsine for her impromptu contribution. And to Simon Callow-Wright for his wrangling of the clips. 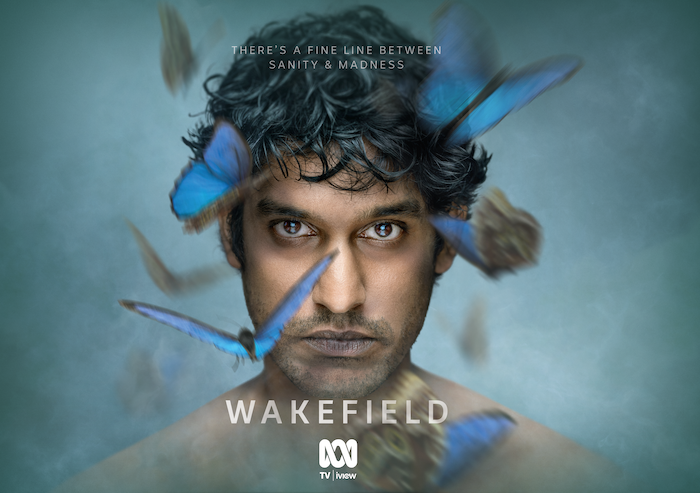 The Guardian called it “superbly made and utterly riveting”.

Mamamia said "'Wakefield' is the most important show on Australian TV right now”.

Editors Gabe Dowrick and Nick Holmes ASE were an integral part of that success.
They join us to share the challenges and triumphs of editing Wakefield.

To attend this ZOOM event please rsvp to:
office@screeneditors.com.au
to receive the link.