50th ANNIVERSARY OF ‘WAKE IN FRIGHT’ 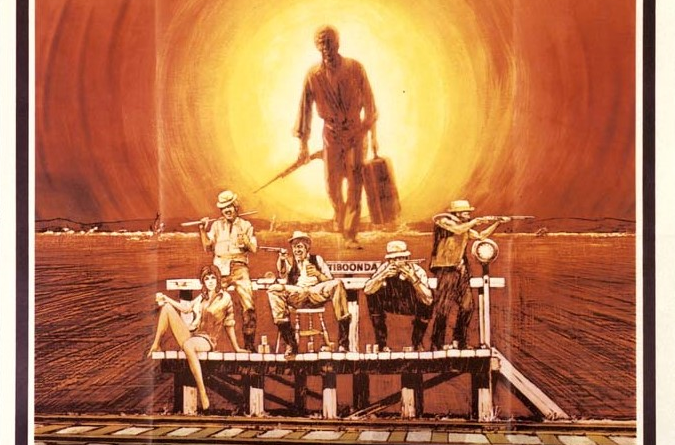 By Tony Buckley AM

I have been a subscriber to 'The New Yorker' magazine for over 45 years and have become addicted to its film reviews, particularly those of critic and author Anthony Lane. Always pithy, witty  and sometimes sarcastic when making comparisons and analogies with celebrated movies from the past.  You can imagine my surprise to find an Australian film being used as one of those benchmarks by Lane in his respectful full-page review of Robert Connolly's 'The Dry’:

"Mel Gibson in 'Mad Max' (1980) didn't exactly motor through green meadows, and 'Wake in Fright' (1971) - the hero of which, like Aaron, takes a room in an isolated Australian town that's weirdly difficult to leave - opens with a slow panoramic shot of semi-desert in ochre and burnt sienna. Most movies seem like weak beer after 'Wake in Fright' whose ferocity is unquenched after fifty years. But what's changed is the desiccation to which 'The Dry' bears witness may be here to stay." 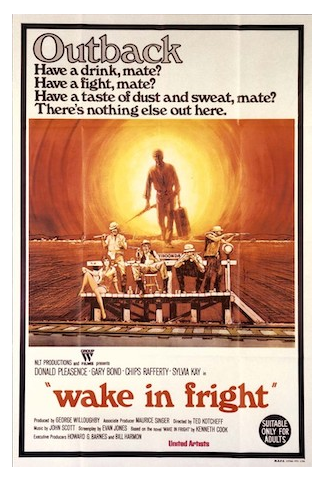 50 years! ... little did this Editor realise he was editing a film that in his own lifetime would become a cult classic. Edited on a black and white work print because  the producers were too mean to provide a colour working copy. It was quite a shock to see the answer print in colour.

I have received a lot of praise for the cutting of the picture but a lot of it is actually on the page. I cite the homoerotic scene in Doc Tydon's hut between Donald Pleasance and Gary Bond. The swinging light globe leading to the climax is cut for cut on the page. One unsung hero on the editing team is Tim Wellburn; the Poms were defeated in trying to replicate the original sound tracks - the kangaroo hunt, comes to mind. These sequences were sent back to Ajax Studios at Ebley Street, and Tim laid up the tracks and sent back the fully mixed sound FX tracks to the UK.

I am often asked is 'Wake' the best Australian film ever? Whoa! It's eligible for inclusion in the pantheon of Australian Cinema as possibly the best film made in Australia. I look at it as the last bastion of the UK Anglo Australian films made here by Ealing Studios and others. I worked as an Assistant Editor in Canada in the winters of 1958-59 and 1959-60. The only difference between our two countries is the weather. There it is bloody cold and here it is bloody hot. With 'Wake' we have a Jamaican/English-born screenwriter (who had never set eyes on Australia until many years later) and a Canadian director, an English DOP (who said on arrival, "the problem with this country is it's one stop overexposed") and an Australian Editor. I'll let you decide.

Two asides:
1) I hadn't realised till the recent Cinematheque Francais session in Paris that France had always used the original title and not the international title - 'Outback.'  The French poster has the French title and the English title prominently displayed.
2)  There are no expletives in the film except the line "You’re mad, you bugger." no 'F's' or 'C's.' Some say they can hear a "bloody" from the Publican Tex Foote as he hurls brawling Jack Thompson and Peter Whittle from the hotel verandah.50 years, including a 13-year search for the negative, the tri seps and other associated materials. A 5-year restoration period, a release in 2009 and a new release in 2021.

Special thanks to all at ASE who have been so supportive for all these years.

Tony's book 'Behind a Velvet Light Trap', which has a detailed chapter on 'Wake in Fright', is still available online at www.buckleyfilms.com.au. The DVD of 'Wake in Fright' is currently distributed by Madman and generally found  in JB HiFi stores.