THE HISTORY OF ‘IN THE BLINK OF AN EYE’ 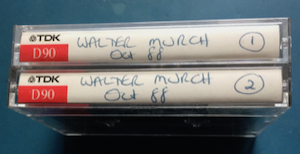 By Ken Sallows ASE
Sandringham, Victoria. Monday 16 August 2021Crawford Productions, my first employer in 1973, at the age of 17, produced many television shows. There was a formula to learn as an Assistant Editor on the 16mm. footage - "Start each scene with a wide shot, then go into the close-ups." Why? The formula that worked for TV was that the audience would not know where they were if an establishing wide shot had not started a scene.

My nights after working in Crawford Productions Abbotsford, were spent riding the tram into Carlton to watch a double bill like, Antonioni’s 'The Red Desert' backed with Herzog’s 'Even Dwarves Started Small', at the Carlton Movie House in Faraday Street, or Jacques Rivette’s 'L'Amour Fou', when the projector broke the print 14 times at the Dental Theatrette, now the site for the Peter MacCallum Cancer Hospital in Parkville. Then running to the Flinders Street railway station to catch the last train to Sandringham and the bus onwards.

I left Crawford Productions in 1976. I had been editing the film components of the first 115+ episodes of 'The Sullivans' and became Brian Kavanagh’s Assistant on two feature films back-to-back, being 'Long Weekend' and 'The Chant of Jimmy Blacksmith'. I had a lot to learn, Brian is a master Editor who taught me a new sense of editorial construction.

In the late 1970s early 1980s I was working as the Assistant Editor to Wayne LeClos on Brian Kavanagh’s produced feature 'Maybe This Time'. 'Apocalypse Now' was due to be screened in a late-night session in Sydney city, probably the George Cinemas. No credits on screen, simply a booklet handed out to the audience. I left the cinema stunned and walked all the way back to my temporary accommodation in Bondi Junction in the middle of the night.

In October 1988, the Australian Film Commission brought Walter Murch - the sound designer and one of the picture Editors of 'Apocalypse Now' - with screenwriters Gill Dennis and Frank Pierson to Australia to talk to prospective writers and directors. The idea was that they confer with promising Australian writers and directors in what was called the Industry Development Support Scheme, initiated by Hilary Furlong. Walter Murch realigned the sound speakers at cinema in Sydney to screen 'Apocalypse Now' with the correct Dolby sound dimensions, as per his sound mix. Walter additionally gave a talk to Editors at Spectrum Films, in Willoughby. 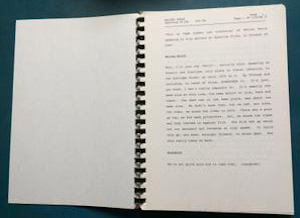 Lynda House, whom I’d worked with on 'Malcolm' and 'Celia', was the manager of the AFC/IDSS series of lectures and offered me two sound cassettes of Walter’s talk. Upon listening to them, I believed they had great value and that I should transcribe  them. What appealed to me was his analysis of editing as a creative medium, beyond technology. The hidden story-tellers and what they looked for and listened to.

I found Walter’s address in Bolinas, across the bay from San Francisco, via the Australian Film Commission and posted him a copy of the transcription. Those days were the days of faxes, not internet nor email connections.

We had trouble trying to find a prospective publisher, until I posted a copy of the transcript to the Australian, Film, Television and Radio School Publications Department in North Ryde, Sydney. This is where Frans Vandenburg comes in. He found the transcription on a desk in-file, read it and urged Meredith Quinn, Head of AFTRS Publications to publish it. Many faxes back and forth between Meredith, Walter and myself. 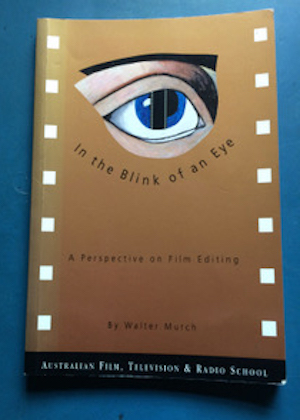 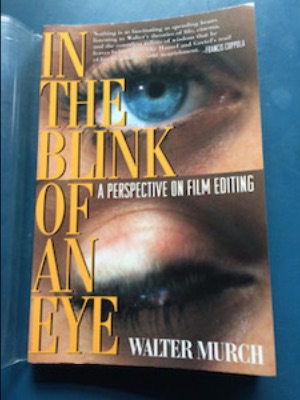 In 1992, some four years after the initial talk, 'In the Blink of an Eye' was published by AFTRS, with Walter’s colour photos of Juliette Binoche and Lena Olin from 'The Unbearable Lightness of Being'. I had contributed an introduction that was edited by screenwriter Glen Crawford and obtained all the copyrights from quoted books. Walter gained the rights to use the colour photos. Walter had edited his talk and added a lengthy afterword, primarily about the then introduction of computer editing.
I was not a fan of the afterword, for I thought it would date the book. However, I was wrong and now agree with most of his notes, especially in relation to the employment of Assistants. The number of Assistants has increased, each with a new computer analysis role. Unfortunately, these extra Assistants do not have the immediate association of working with the Editor.

After one print run, Sllman-Janes Press in Beverly Hills, California, reprinted the book in 1995, with many revisions and replacing my introduction with another by Francis Ford Coppola. The Silman-Janes version has achieved many reprints and has become a staple of teaching prospective Editors.

In 2000/2001 Michael Ondaatje offered a reading of his then latest novel, 'Anil's Ghost' at the University of Melbourne. At the end of his talk, he was asked what his next book would be. He announced 'The Conversations: Walter Murch and the Art of Editing Film'. The audience was puzzled. Who was this Walter Murch person? Michael explained his association with Walter during the adaption of his Booker Prize winning novel, 'The English Patient', directed by Anthony Minghella, and how he had always wanted to be a film Editor.

In the signing queue, I held back for I understood that authors dislike a “fan” presenting multiple first editions for a signature, in preference for the one of latest book sale. I presented my books and said to Michael that I was the person behind the publication of Walter’s 'In the Blink of an Eye'. He stopped and looked at me and smiled with gratitude - “You should know that book is kind of like ‘Zen and The Art of Film Editing”. 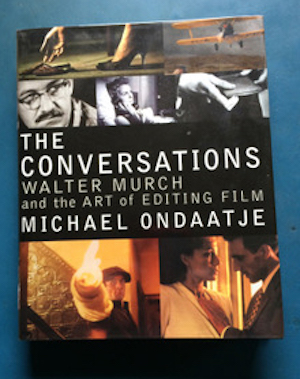 Michael Ondaatje’s book is quite spectacular, almost a coffee-table book. It is based on San Francisco radio interviews between Murch and Ondaatje in 1997, It includes a lot more of Walter’s thoughts about cinema history. In the Ondaatje book Walter does expand on John Huston’s ‘Blink’ theory. Many years before, I tried some examples, by removing blinks entirely from a conversation between two actors in mid close-up. I found that I had achieved a zombie film.It also discussed Walter’s Idea of six6 reasons to make an edit - the first reason is  Emotion. I have been in an editing room and the director has lost the plot and become quite cranky. I asked, “What is going on?” The director said that they had read the Murch book, and emotion was the primary reason to make an edit/cut. I tried to remain calm and responded that not was not your emotion, but what was on the screen.

Chas Freidrichs, a collector of audio interviews from Mid-West USA, contacted me in 2019, with I assume Walter’s approval, to offer him a digital copy of the original Spectrum cassette talk from 1988. I approached sound designer Paul Pirola who managed to find a cassette player from his garage, he digitally transferred the cassettes and sent the files via the Internet to Chas. I do not know what has happened with Chas’ distribution.

Somebody else is making money out of this. I have never made a cent, but that is not the point. Walter’s lecture and my subsequent desire for it to be published haunts me, Now some 33 years later. I hope that anyone who reads it in its varying forms understands what we wonderful hidden Editors achieve.