Frans Vandenburg ASE was made a Lifetime Member of the Guild after four decades in the industry. Dany Cooper ASE readily agreed to give a speech about Frans, and to help her write it, we asked Frans's colleagues, Assistants and students for stories and photos, and were overwhelmed by the response. The stories had to be savagely cut down to fit into Dany's speech, but were included in full in a book given to Frans. 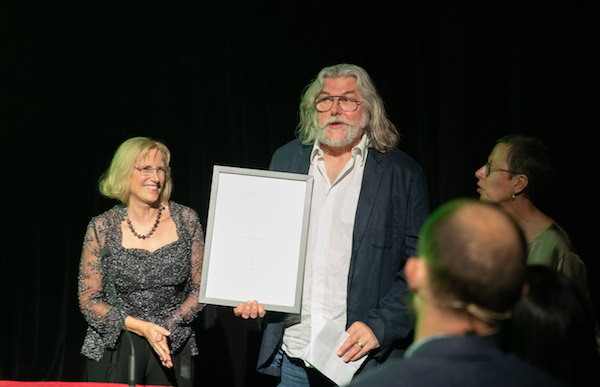 This is Dany's speech:

"One of the original members of the ASE, Frans Vandenburg has worked in editing for over 40 years as an Assistant, an Editor, a teacher and a director. A book has been compiled of quotes from the Assistants, peers and directors that Frans has worked with throughout the years. So many wonderful stories were sent from industry greats but too many to read tonight.

Here is a small selection.

Margaret Sixel:
“I have wonderful memories of working with Frans. Not only was he a deeply thoughtful and elegant Editor, he was the kindest man as well."

Lindi Harrison ASE:
“He suggested I cut a footy scene starring a very young Russel Crowe. I didn’t know the rules of the game and he responded, 'That’s OK, just keep your eye on the ball and Russ, and give it ya best shot.'”

Kat Barker:
“Frans pushed me to assemble for him, and with his guidance and feedback I gained more confidence. He also made it clear that he valued my opinion on his work and encouraged me to believe in myself."

Emma Hay ASE:
“Frans has been a dear friend for many years and was an important mentor. I am so pleased that he is being given the honour of a Lifetime Membership, it is richly deserved.”

Shawn Seet:
"Frans didn't just cut a film.  He examined it, questioned it, played with it, laughed at it, nurtured it and essentially owned it.  I have never laughed so much as when I was working with Franso."

Ken Sallows ASE:
"The only reason Walter Murch's ‘In the Blink of an Eye’ was published at all was due to Frans, as he picked up the manuscript I had sent to Meredith Quinn, at AFTRS Publishing, read it, and told her that this was brilliant.”

Former Head of Editing Sara Bennett says,
“We interviewed someone who was a bundle of nerves, very inarticulate and had no work to show us ….But Frans thought we had been talking to someone “who felt like an Editor, someone you’d like to work with”. Frans was proved right."

John Duigan recalls,
“We took our daily noms de guerre from ‘Star Wars’. Frans was Chewbacca – right build, height, posture, facial hair and degree of calm.  Always supportive, he was never slavishly so.  He creates an atmosphere in which the work is valued and important. I am thrilled his skills are being celebrated tonight."

One of the ASE’s founders, Jenny Ward has this to say,
“I know Frans has always been passionate and committed to ensuring post-production personnel receive the respect they duly deserve.  He is a quiet achiever and goes about his advocacy and care for fellow Editors and film personnel without wishing to receive acknowledgement."

And finally Phillip Noyce:
"In the mid-‘90s I commissioned Frans to find extant elements of my first feature film, ‘Newsfront’ from which we hoped to assemble a full copy for posterity. Frans spent almost a year in a search that took him twice around the world.  ‘Newsfront’ lives on for future generations simply because of Frans‘s refusal to give up, and because of his love and loyalty for every film that he works on.  Frans is a national treasure.”

I have witnessed Fran’s work over the years with an awe akin to watching a poet. His sense of rhythm and his ability to create emotion in his edits are skills to be greatly admired, at the core performance based, and a dedication to getting the very best out his material. He taught me about collaboration through example.

He is a great talent, and a true and gentle man.

Congratulations Frans on your lifetime achievement award - it is indeed richly deserved.  With love."

Frans then received a standing ovation as he came to the stage where  he expressed his gratitude for all the accolades and recognition, then spoke about his career, colleagues, students, and his new role as co-director on his long-term project 'John Farrow: Hollywood's Man in the Shadows', which is co-directed by Claude Gonzalez and edited by Walter McIntosh and Antoinette Ford.