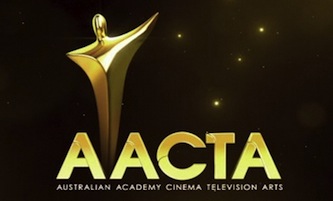 Monday January 21st, Australia Day, for many it was time for the family, but for those intrepid enough to brave the Sydney rain and closed roads of the CBD, ACCTA and the ASE were hosting the Meet the Members Event celebrating the editing nominations of the 2015 ACCTA Awards at the George Street Event Cinema.

Representing Editing in Television were Deb Peart ASE for The Code and Scott Gray ASE and Alexandre de Franceschi ASE for The Broken Shore.

Editing in Feature Films was represented by Simon Njoo for The Babadook and Matt Villa ASE with two nominations for Predestination and The Water Diviner.

A series of questions were posed and each editor took it in turns to answer them. Here are some of the questions that were asked.

Did you always want to be an editor - when did you first realise this was to be your chosen career?

Deb Peart ASE – Started as an assistant editor from a placement from RMIT University.

Scott Gray ASE – Was interested in film since school, and became a runner at a TV station as he was keen on the technicality of the medium.

Matt Villa ASE - Grew up on Star Wars and wanted to be a part of that inspiring method of storytelling and felt that editing was a path that contributed to that storytelling.

Simon Njoo - started out studying journalism, but loved films. He did a film course as part of his degree, and he became interested in the storytelling of editing. He didn’t think that people made films but that they simply “existed”. Simon started working in France where he knocked on doors, and met and worked with some great editors.

How do you attack a scene?

Simon Njoo – There was a lot of material and not much time. The Babadook was edited chronologically after the shoot finished, and did not deviate from the script. Simon would assemble in morning and then would work through the cut closely with the director in the afternoon.

Alexandre de Franceschi ASE - Came onto The Broken Shore for fine cut, when it already had a strong shape. He took the picture through to lock off with Rowan Woods, (director).

Scott Gray ASE said that The Broken Shore was a well-written script. The editing was about trying to make the characters believable by looking for truth in performance. Scott, when selecting takes, finds moments when the actors “are” the characters and works from there.

Deb Peart ASE – Starts by looking through takes. The Code was shot and therefore assembled out of order so it was important to build and develop each performance as we went along.

Matt Villa ASE - Immediately breaks down dailies into sequences of the lines of dialogue from each take. By doing this he can compare and contrast performances quickly and efficiently.

Question to the panel from Simon Njoo - Do you find that you go back to one take for the backbone of a scene?

Answer from Matt Villa ASE - I finds that it generally works out that way, but don’t consciously choose it.

Does anyone watch dailies anymore?

Deb Peart ASE feels that an editor has to watch the dailies. The Editor is possibly the only person, she said, at least in TV drama who is able to watch the rushes throughout, and she needs to do this in order to have a cut that is 80% polished by the end of the shoot. In TV drama, Editors have to trust their instinct and gut feeling, due to an extremely fast turn around.

Scott Gray ASE likes to, and is lucky enough to watch every frame of the rushes. He felt it was great to watch them with the Director, as he picks up comments and direction first hand. Scott also likes to let the assistants assemble after he makes the selects.

Alexandre de Franceschi ASE said that all editors look at rushes, but he has changed the way he has been working recently due to large amounts of footage being shot. Alexandre now assembles a scene, following his instinct and then looks at the dailies after assembly, going back through each moment to make sure that the best material has been included.

Matt Villa ASE – hasn’t been on a film where the director watches the dailies at night due to schedule. He misses out on the directors comments as a result. Instead he cuts a scene and takes that to the director on wrap, where he can get feedback from the director.

Simon Njoo’s remembers as an assistant editor that his impression of dailies was that they were a tech check for the DOP and Director and that Editors snuck in to listen to the Director who always gave a lot of notes. But now with digital, they can do the tech check on set, Simon puts something together to show the Director at the end of the day.

How did you work with the director on your show? / Where did you look for inspiration and influences to bring something different and fresh to this project? What do you think you added?

Alexandre de Franceschi ASE said, be patient, each project has their own unique challenge, look at the project as a whole and keep the film on track.

Scott Gray ASE said that the Editor has to defend the film and get the best film possible. Be the optimist.

Matt Villa ASE discussed edit room politics. The Editor is, first and foremost, allied to the director, you are their confidant. Personally, be on your game, be a storyteller, but also be the protector of the film and of the Director.

Simon Njoo said to make sure the film is what you are working towards, do the best you can and get pleasure out of it.

Deb Peart ASE - Believes in collaboration. Whilst being a producers medium its important to protect the Director’s vision. Approach every project with an open heart, she said one had to be open minded and flexible.

Question from the room:

How do you judge best editing?

Alexandre de Franceschi ASE – It is easy to judge cinematography, but hard to judge editing. Good editing shows when you feel an emotional response.

Deb Peart ASE - Editing is very hard to judge. It can be looked at for rhythm and timing. She also said if you find yourself watching the cutting, then you are not enjoying the editing.

Scott Gray ASE - If you can see the filmmaking then the editing is not so good, our area of work is trying to rescue a scene from that.

Simon Njoo - When you come out of a film and say “that actor was really good in that film”, that was because the editor pulled together a good and consistent performance.