EVENT REPORT: INSIDE THE EDIT (QLD) 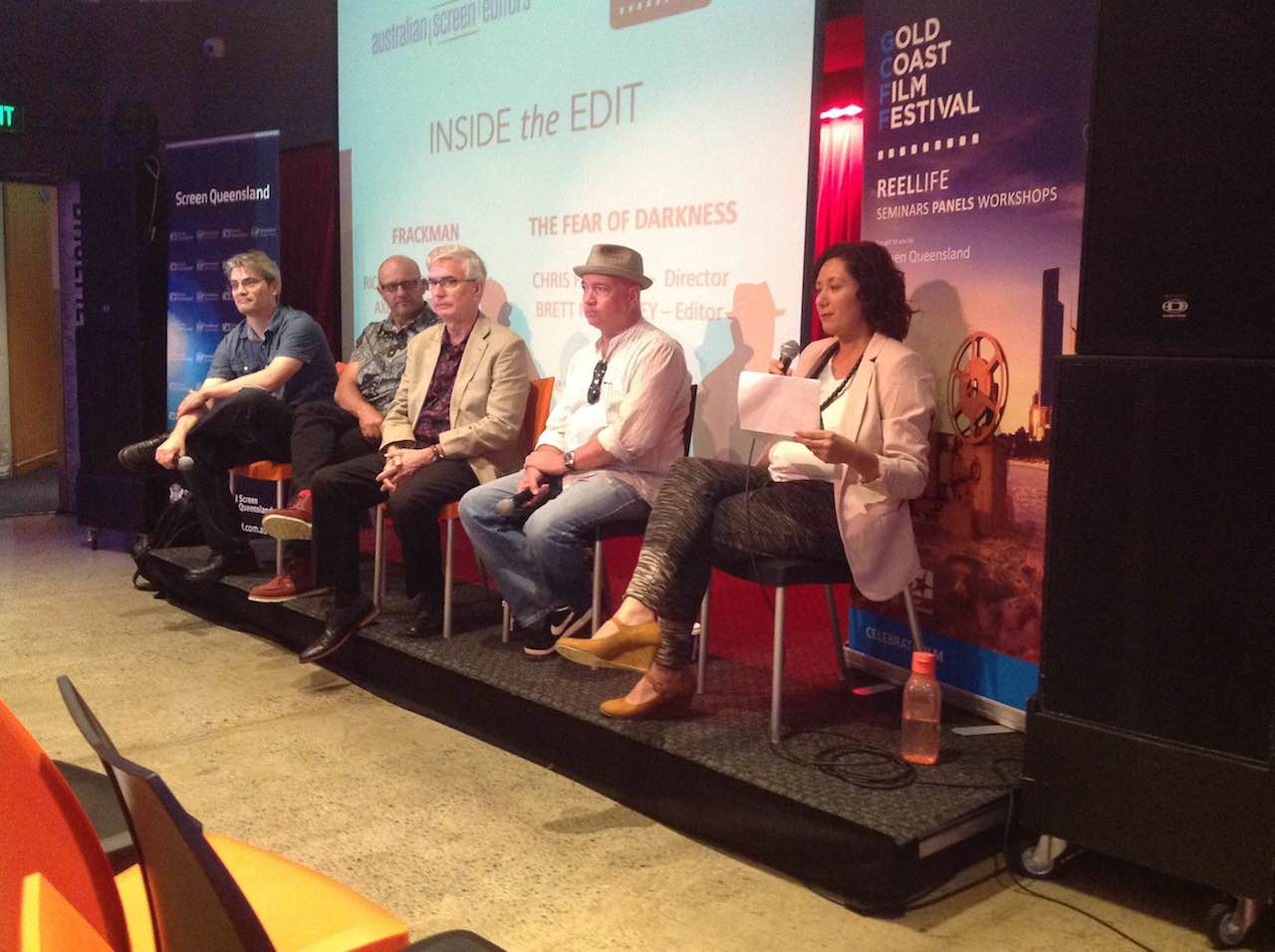 EVENT SUMMARY - INSIDE THE EDIT

Frackman and The Fear of the Darkness

Sunday the 12th of April

INSIDE THE EDIT featured two Director/Editor teams. Chris Fitchett (w/d) and Brett McCauley (e) had just premiered their psychological thriller The Fear of the Darkness the previous night to multiple gasps, screams and applause. With them were Richard Todd (d) and our very own QLD ASE sub-committee Chair Axel Grigor, who were about to showcase their acclaimed feature-length documentary Frackman directly after our ASE event. Scott Walton, who also edited Frackman, was unfortunately unable to attend as he was busy locking off another film.

Topics discussed focused on the Director-Editor relationship specific to the two productions, and highlighted the different processes necessary to cutting a documentary and drama. The audience was awed by the sheer vastness of what Axel faced in the cutting room when dealing with massive amounts of footage and a continually evolving storyline, and enthralled by insider techniques such as how Brett would use a slower rhythmic cutting to build a creepy atmosphere before hitting the audience with a shock cut.

Some highlights from the session...

CHARLOTTE: How closely does the final version of The Fear of the Darkness reflect the script you were given at the start of the edit?

BRETT (e): Pretty close actually. We only ended up shifting a couple of scenes.

CHRIS (w/d): I had done a lot of work on the script over the years, so I knew it was pretty tight.

CHARLOTTE: Axel, can you talk a bit about how you approached Frackman and how you whittled away the large amounts of footage to find the story?

AXEL (e): We had around 500 hours of footage for the project. Richard and I worked really closely during the edit to draw out a dramatic structure from the mountain of rushes, working out satisfying story lines for main and supporting characters etc.

Richard (d) - I was going through the footage in a separate edit suite - I’ve done a lot of editing on my previous films - and I would assemble what I felt was the most interesting footage into various timelines that I would then send across to Axel.

CHARLOTTE: TFOD is a psychological thriller. The editing style is quite classical, can you tell us how you approached the work? Example of how you attacked a pivotal scene?

BRETT: Yes, Chris had approached the whole film in this way  - long, slow tracking shots to create suspense. I had to work within those constraints and try and find a rhythm that allowed the shot to linger but try to guess, without final music, when to cut it before things ended up dragging on.

CHRIS: [Shows a scene from the film]. There was one scene where Brett gets to go crazy with the edit. It’s where we see the monster for the first time. Brett has cut in parts of shots that appear much later in the film. It all works really well.

CHARLOTTE: Axel, you edited Frackman in Margaret River, away from home and family. It must have been quite an immersive experience. Was it hard to keep objective throughout the process?

AXEL: It was a huge job to process close to five years of filming. Getting to first rough cut took around 15 weeks. The process was helped greatly by the close partnership between me and Richard. At the end of each day we'd discuss the scenes and sequences I had constructed - what made certain moments unique? How did they contribute to the overall story? It was an arduous but productive process that kept us challenging the emerging story structure and our character arcs.

CHARLOTTE: Where there any surprises that emerged during the edit?

RICHARD: Yes, we were still filming during the post-production phase. For example, a great love story emerged during the edit that ended up having a big influence on the overall narrative.

CHARLOTTE: On TFOD, how did you work together?

BRETT: Each scene, I would cut the rough cut and we would work together to polish it through to the end.

CHRIS: We worked really well together and in the end it was all about trusting your editor. The edit took about 3 months from start to finish.

RICHARD: Since we had such a huge amount of footage to work with, I really needed an editor that was like a director, who could make decisions on that level. Alot of the time I was away still shooting when Axel was back in the edit suite cutting.

CHARLOTTE: How did you find each other?

CHRIS: The film’s producer, Mark Overett, had worked with Brett in the past and recommended him to me for the film.

RICHARD: For funding reasons, we needed to find an editor from Queensland. Axel came highly recommended. We chatted on the phone for about 2 hours and he really got it and I knew he was the perfect person for the job. He was also prepared to come over to Western Australia to edit the film, which meant he had to spend fair amount of time away from his family.

Big thanks to everyone in the panel for helping inform the attending film fans on the importance of the editor to a film's success, and for increasing awareness of the ASE. 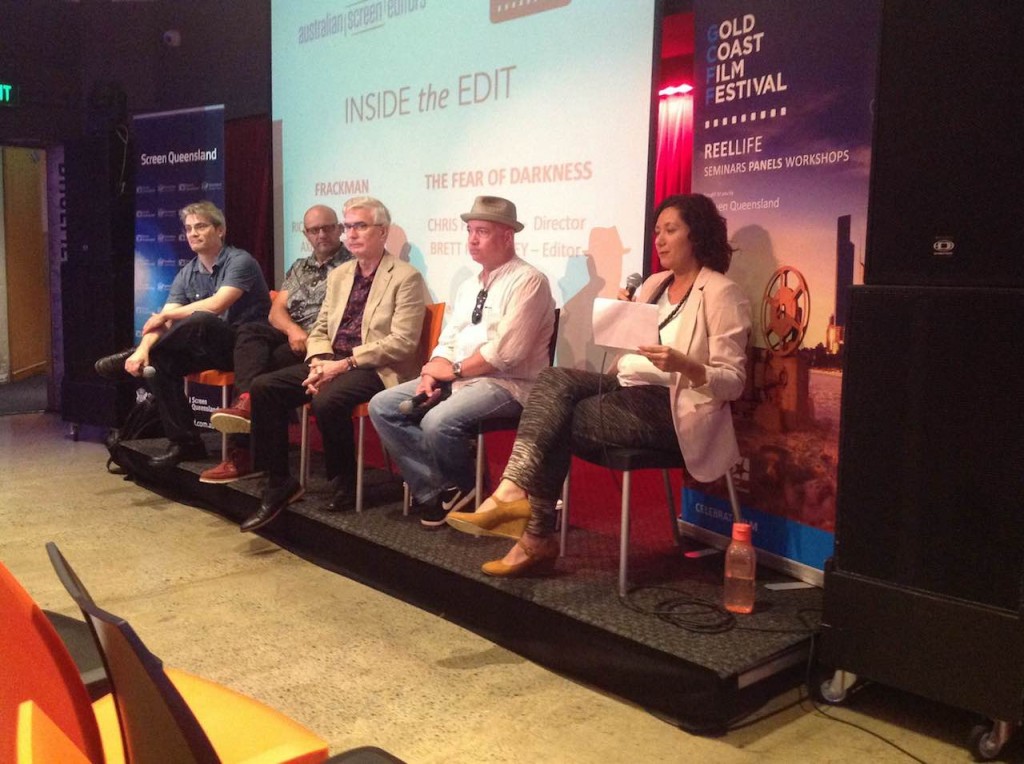