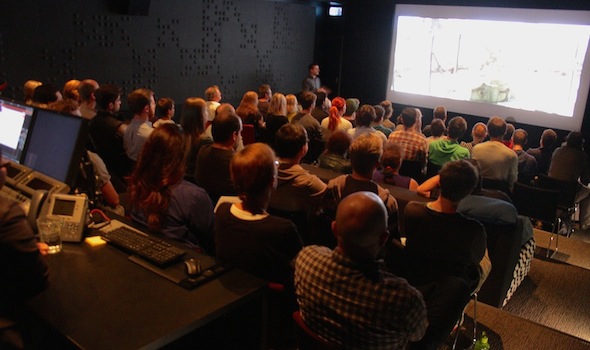 When Gravity won the Academy Award for Best Achievement in Visual Effects at this years Oscars, the winner Tim Webber thanked the Adelaide company Rising Sun Pictures (RSP), who contributed towards the film. But Gravity is not the only high profile project that RSP has worked on; their showreel includes other major blockbusters such as the Harry Potter films, The Hunger Games, Prometheus, The Wolverine and The Great Gatsby. So it was with great excitement that the SA branch of Australian Screen Editors hosted a function at RSP to find out some of the secrets behind the magic. It was hosted in Rising Sun Picture's custom built 60 seat Digital Intermediate theatre.

VFX Producer Ian Cope got the evening started with an introduction to the history and story of Rising Sun and then showed a series of images from Adelaide. One of the most remarkable things about the story of RSP is that they are based in one of Australia's smallest capital cities, but yet have managed to work on some of the biggest Hollywood blockbusters of the last decade. Unfortunately for those looking for the secret of the quick road to success, you will be disappointed learn there is no such thing. The team at RSP became top class VFX creators through hard work, unrelenting creativity and smart project management. The second speaker was Alex Meddick, VFX editor and Digital Services Manager of RSP. Together they showed the various editors and students at the screening a series of remarkably detailed before-and-after sequences of many of the scenes that RSP worked on.

RSP services include concept development, creating digital environments, effects, stimulations, creatures and characters, and ‘asset’ (3D models) creation. Some of RSP's best work in creature creation was seen in the film Charlotte's Web where they created and animated the spider Charlotte, but their work has also scared millions of Harry Potter fans in the form of the shadowy Dementors looming over Hogwarts. In The Wolverine, they helped create the simulated nuclear explosion at Nagasaki, converting Sydney harbour into 1940s Japan. This scene was especially fascinating as they stripped back the layers of visual effects to show the original shot and then added back the multiple layers of effects, which helped to create the life-like explosion and aftermath. In other shots from the film, background elements were created in 3D environments that blended seamlessly into the film.

Gravity was the focus of the evening and Ian and Alex didn’t disappoint. Rising Sun Pictures worked on the sequence where the Chinese space station re-enters the Earth’s atmosphere and breaks up in spectacular fashion. During their research period, the team released a weather balloon with high-resolution cameras into the atmosphere above the Australian Outback. It was the images from 36km above the Earth that helped to create the background images for the low altitude re-entry shots. But some of the harder parts of the sequence involved the actual break-up of the spacecraft, because of the speed of the descent, the amount of debris generated as well as being something that no-one had actually seen first-hand or recorded on film in any detail. VFX company Framestore in London provided a digital 3D model of the spacecraft and it was this that RSP manipulated and built upon to create their final sequence. RSP also created the matte backgrounds of Earth and the debris field created by the spaceship.

In addition to showing amazing example’s of RSP’s work, the presenting duo went one step further, explaining their digital workflow. As VFX and compositing work requires many DPX files and also can involve many different scenes and departments (matte paintings, lighting, simulations, etc.), a strong media management workflow is needed. They showed examples of camera sheets, VFX pull sheets (for DPX files), shotgun, pipeline demonstrations and explained the work of a VFX editor. They also explained the importance of keeping clients updated and talking to directors & VFX supervisors during this process. To this end, RSP used software called CineSync, which allowed them to talk to directors and review the film sequences in sync, anywhere in the world. Cinesync was actually developed by Rising Sun Research (now called Cospective), and is now used by many of the major studios around the world. Alex and Ian even showed the audience a clip of Tony Clark (one of the RSP founders and RSP’s VFX Supervisor on Gravity) in a CineSync session with Alfonso Cuarón, the director of Gravity. CineSync is an amazing step forward allowing Australia to become competitive in a global film market.

The evening concluded with some drinks and refreshments provided by ASE and it gave the audience a chance to talk further with Alex and Ian from Rising Sun Pictures. The attendees were left with a larger appreciation of the work of the VFX specialists, a much greater understanding of the workflow used and of the importance of VFX editors in the field of post production. Overall, the evening was a fantastic experience for all involved and for a moment allowed us to share in the secrets behind Rising Sun’s Hollywood success.