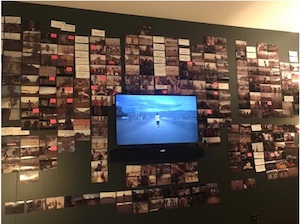 THE EDITING PROCESS FOR 'RUN' 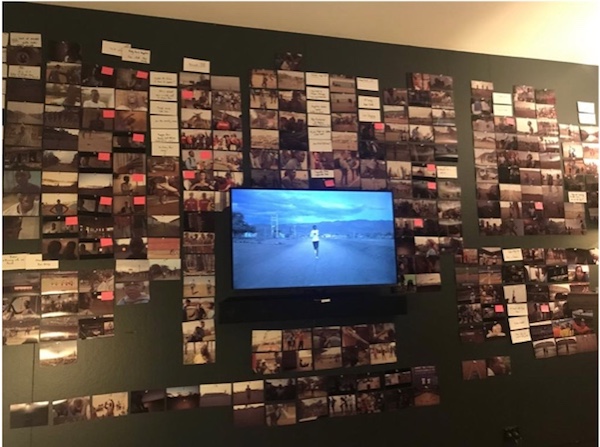 'RUN' is a feature-length documentary filmed over four years and across eight countries. It follows the journey of a small group of Sudanese refugees endeavouring to qualify for the Olympic Games in Tokyo, 2020.

Filming began in 2017, and the final shoot was due to culminate in a special selection trial in Doha, Qatar for refugee athletes in February of 2020. My flight to Doha was scheduled on the day the lockdown was called in Australia. This was also the planned ending of the film.

My production company is based in London and I’m a resident of Sydney. It was always the plan to do the post-production in Sydney, and as it turned out, that decision was a wise one.

After convincing a wary Philip Horn to come on-board as the lead Editor, we met with a few different post facilities to discuss the project and find a home for it. The decision was made to work with The Editors in Newtown. They were very enthusiastic and passionate about the project.

I’ve worked with Philip for many years on commercial projects so I had a lot of trust in him. His organisational abilities and depth of understanding of workflow even before any editing begins I find reassuring. He’s also an intelligent and sensitive creative person and he intuitively gets what I’m trying to do with my work.

We acquired a whiteboard and set up inside his home office, and I began to tell him the story of the film. We wrote the arc of the idea on the whiteboard and detailed important subjects and key scenes. Ultimately this was about writing a sort of pre-editing shorthand script. What was the film about? What was the story I wanted to tell? Obviously I had ideas before filming but those tend to morph over time, so this was a good chance to just chew over what the point of all this footage was.

Physically logging all the material from all my shoots over four years was a huge task. The team of Assistant Editors at The Editors did a magnificent job of working through it all and prepping the material. Philip suggested we work with Lily Davis as his Assembly Editor. She was invaluable in building the foundations of the film, and quickly became a key member of the team. In the end she knew the material better than any of us.

We then moved to The Editors and they gave us a permanent sort of war room/edit suite. I did a physical paper edit with Lily. It’s something I’ve done in the past and I think it works great to get away from an entirely digital approach. All the best shots, key scenes are screenshot and then printed as photographs. There are hundreds of images which I like to pin up on the wall and arrange in linear form. It means the room is totally surrounding us in all the images of the final film. I can scan it super quick throughout the process. We can move entire sections and begin to build the story.

At this stage the ending of the film was still missing. Once we had a rough structure, Lily began blocking out the sequences of the film as per the walls. As she finished assembly of each section, Philip started to come in and sit in an adjacent room and edit from these rough assemblies. He prefers to work quietly on his own and then call me in when needed. It’s the way we’ve always worked. We had 16 scenes or chapters which make up the final film.

We started our process in December 2019, and by February 2020 it was clear because of COVID we could no longer work from inside The Editors, and also I would not be getting on a plane to shoot the final scenes of the film. We had to pivot on all elements of the film-making process, and this put a lot extra pressure on the edit.

I started to shoot my key characters from my garage using screen capture software, and I taught the characters who were now spread around the world in different Refugee camps, how to shoot  footage with their phones. All the plans I had regarding filming and continuity with past material went out the window. The imposition of COVID became the story and it was extraordinary because it exposed all the resilience and positivity of the lead characters.

By this time I could not meet any of the Editors face to face as they were working from home. It was difficult but not impossible. By this time we added Peter Barton to make a team of three. The three Editors took sections away and worked from home, and I reviewed independently and stayed in touch with them. Downloading and sharing big film files was not ideal but we made it work. I think on occasions I begged to come over to Philip’s house and look through his window at the edit.

The three Editors also worked together sharing their chapters and getting notes from one another. Early on in the edit there was some concern that three Editors working remotely may make the edit somewhat disjointed. This concern soon proved to be unfounded as they took sections they felt affinity for and swapped and changed from time to time. It was organised but also a quite fluid process.

The entire editing process took about six months from start to finish. Some periods were more intense than others. The film launched on World Refugee Day, the 20th of June, 2020. The target date also helped keep us moving forward.

Maybe the impediments of COVID helped the film. It totally transformed how I shot footage, the storyline and the editing process. But whether it’s a pandemic or not, there are always problems in making a film. How you overcome and solve them often produces the most interesting ideas.

For all of us the journey of the Refugee athletes was something we could vicariously live through during the most intense part of the lockdown. The film kept us focussed and pushed all of us to do things differently. The editing process was actually a really enjoyable experience which I can wholly attribute to the three Editors who worked openly and without ego of any kind.

I had the absolute joy of cutting Richard Bullock’s feature documentary 'RUN' through the first half of 2020 alongside lead Editor Philip Horn. The story was a chronological journey following its subjects, the members of the Athlete Refugee Team, through various running competitions all over the world leading up to the 2020 Olympic Games. Perhaps more-so, it was the story of various hardships they have faced, and continue to face. The edit was a constant re-examination and balancing act of these ideas.

At the suggestion of Philip I came on board towards the tail end of the selecting process for the first assembly (thanks Philip), and then Peter Barton not long after that as a third Editor. Avid was our preferred software for the project and we were all supported by the incredible team of Assistant Editors and producers at The Editors. Given the tight turnaround, and how much we were all chomping at the bit to get started, only a loose project prep was done. Instead, the majority of the organisation was in the selecting process. The rushes were split out by shoot location and date, then loosely compiled into sequences based on moments or activities. Finally there were various markers with descriptions and actions put on each clip. We were primarily relying on memory for finding things in the rushes! All the interviews were transcribed using an external service called Rev. The translations were where things got a bit tricky, but one of the athletes from the film was used to help translate large sections of dialogue for us. There was a bit of trial and error but it all worked out eventually.

Ordinarily we all would have been working within the one building on a shared server. Instead, in the early stages of the edit we had to move to remote set-ups, due to a little something called COVID-19. At that stage the film was already split out into a series of ‘scene’ bins. On a day-to-day basis we’d each select what we were drawn to working on for the day, then at the end of the day we’d transfer bins to each other. There were regular conference calls between the Editors and the director, plus a group chat on WhatsApp that was pinging most of the day.

Fortunately, all of the Editors had quite a similar vision for the film thematically. We were also aligned in our cutting style. I’d say 90% of the time we were in agreement with each other. Whenever someone raised a suggestion or concern it was usually followed by a chorus of “I agree”… “good point”. I believe having the three of us working simultaneously was nothing but an enormous benefit to the film - each bringing different insight, but ultimately quite strangely unified in approach.

There were a few challenges that were unpicked through the edit. We had to navigate creative solutions to comprehension gaps. It was particularly difficult finding the best links between scenes, as there were a lot of movable parts. In this way the film underwent a huge transformation. From first assembly to fine cut it was almost unrecognisable. Then, a major challenge surfaced when it was confirmed that Richard would not be able to fly overseas for the final trials pre-Tokyo. This was closely followed by the news that the 2020 Olympic Games would be postponed altogether, which was the expected close of our film. During this whole period Richard continued shooting interviews via screen recording software called ScreenFlow, which was eventually our saving grace. I think as Editors we were all originally a little nervous about this turn of events and unsure if this series of interviews would provide us with any kind of emotional punch for the end of the film. Or a sense of closure at all. However these concerns proved unfounded. The extraordinary sentiments that arose from these interviews were a testament to Richard and the athletes themselves. It may not have been the ending that was expected, but in many ways it was even better. Just another hardship the team faced.

These challenges became some of my favourite things about the process in the end. Editorial collaboration with such likeminded people was the joy. It was thanks to Richard and the Athlete Refugee Team that we all stayed sane in 2020 for sure. Evidently we enjoyed ourselves, as Philip and I are now editing alongside each other again on Richard Bullock’s next documentary project. We couldn’t say yes to the proposition fast enough.