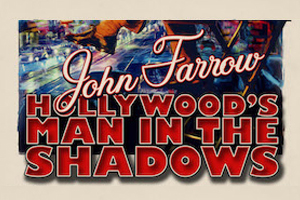 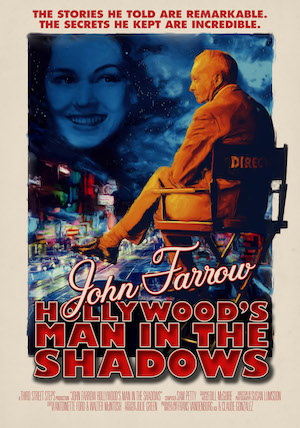 Working on Frans Vandenburg and Claude Gonzalez’s documentary 'John Farrow: Hollywood’s Man in the Shadows' reminded me how dedicated filmmakers need to be to capture the essence of their subject in their films.  Over the past decade when Frans and Claude have been researching the films of John Farrow they have been compelled by the enigmatic figure of this man.  Farrow grew up in the Sydney suburb of Marrickville and went on to direct many Hollywood films in the 1930s, '40s and '50s – about 40 features in total.  Despite Farrow’s success during the Golden Age of the Hollywood studios, very few Australians (even those in the film industry) have heard of him, although his daughter Mia Farrow and grandson Ronan Farrow are more widely known.

Farrow died in 1963, so only a few of his friends and collaborators are still alive and could be interviewed.  Interviewees in the documentary include actor Darryl Hickman, who appeared in three Farrow films, and actress Terry Moore, who Farrow directed in one of his last projects.  Moore was married to Howard Hughes and was a close friend of Marilyn Monroe.  Frans and Claude also interviewed Farrow’s son, John Charles Farrow.  Daughter Mia Farrow has a presence in the film through an audio recording.  Frans and Claude filmed interviews with more recent Australian directors, such as Bruce Beresford, Ken Cameron, Philippe Mora, and Phillip Noyce, who comment on Farrow’s work.

With this wealth of material, the challenge in the edit room was to decide what could be left out.  As co-directors, Frans and Claude would frequently adopt roles akin to ‘good cop / bad cop’ – one of them pointing out how important the many threads of the story were to understanding Farrow, and the other encouraging us to be ruthless in our cutting them down, to fit the story into the 90-minute running time.

When it came time for me to leave the project, due to a previously-booked commitment overseas, I felt secure in handing the edit over to Antoinette Ford, as I knew she would have the sensitivity to continue refining the long cut that we had at that stage.  I also knew she would enjoy working with Frans and Claude, both experienced filmmakers, whose complementary skills were a tremendous strength in bringing the story of John Farrow’s brilliant career and contradictory life to the screen.

Having worked previously with Frans Vandenburg and Claude Gonzales, the co-directors of the feature documentary ‘John Farrow Man in the Shadows’, I was thrilled when they asked me to pick up and finish an edit that had been started by Editor Walter McIntosh, who was heading overseas.

It was a 10-week edit, and I was excited to be working with Frans, as he is an esteemed Editor.  It was a dream edit, the topic was fascinating, and both Claude and Frans were very generous and great to work with.

The main thing I took away from the edit was a new knowledge of the filmmaker John Farrow. I did not know about him at the start of the film. By the end, I was a huge fan.

Lockdown has postponed or shut down in-house festivals but I hope lots of people get to see this doco and discover Farrow’s films. As well as being a prolific filmmaker he is the father of Mia Farrow and grandfather of Ronan Farrow, and was originally a Sydney boy.