The Power of the Cut – Sydney 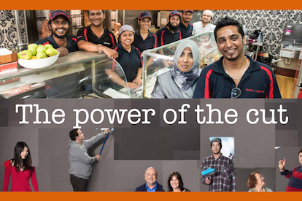 On 4th May a good crowd gathered at AFTRS to hear Ellie Award winners discuss their award-winning work.  As moderator Andrea Lang ASE said, it was all about the facts, with the panel comprising of Andrew Cooke and Philippa Rowlands ASE (Best Editing in a Documentary non-Feature - Changing Minds) and Matthew Walker (Best Editing in Factual Entertainment -  Kebab Kings).  But as the audience soon discovered, there was plenty of drama involved both on and off screen.

The focus of the night, as in the edits, was on how to manage the huge amount of footage generated by documentary crews. Much of the editing time in both programs was spent finding the dramatic structure, the story beats, for the episodes and the series as a whole. For Changing Minds, Philippa and Andrew cut by character - editing the stories of individual patients before organising them into three episodes. In Kebab Kings the challenge for Matthew and the other Editors and producers was wading through the thousands of hours of footage to find  an overarching story, a throughline that all the scenes and moments captured could hang from.  This process was, of course, complicated by the fact that for the start of the edits at least the crews were still filming and bringing footage that could conceivably change everything.  Andrew and Philippa relied heavily on cards to help map out the stories. Matthew sees the value of the cards, but is less likely to use them once the edit has started.

All three Editors spent a huge amount of time watching the rushes as it quickly became obvious that the small moments could become very important in understanding a character or scene. Kebab Kings also had microphones at all the tables which recorded off-camera dramas that were sometimes more interersting than what was happening on-camera. For both programs the Editors kept a collection of potentially useful scenes or vingettes that could be dropped into the episodes when they seemed relevant, or as a relief from the drama. 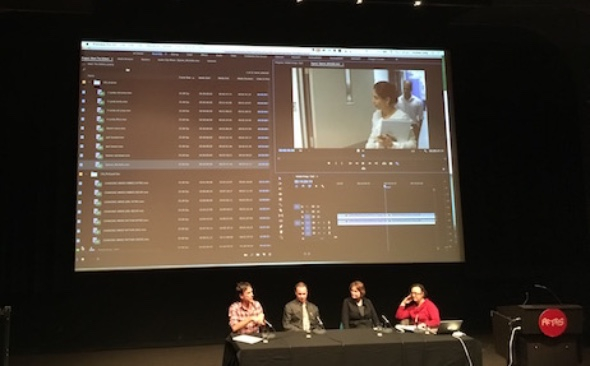 Another major issue faced in both shows was the matter of consent. Changing Minds follows patients in a mental health unit, who had the right to pull out of the program at any time - including the day the episode was due to be aired. Andrew and Philippa discussed the need to take great care to present the patients fairly, and also clearly convey the nature of their illnesses and treatments to the audience.  Changing Minds often used humour as a break from the more serious moments, but were always mindful of the need to be laughing with the characters, and not at them.

Andrew and Philippa discussed the advantages of using different cutting styles for each character. Matthew found himself immersed in certain scenes and creating long detailed edits that were far too slow for the program. While he battled to cut them down and remove what seemed at the time to be significant moments, Matthew said once he watched the completed scenes he was glad he’d been forced to reduce them to the essentials.

It was an eye-opening discussion into the intricacies of editing factual programs. We would like to thank Matthew, Philippa, Andrew and Andrea for volunteering their time and expertise, and also AFTRS for once again providing a venue.  A recording of the discussion will be uploaded soon. 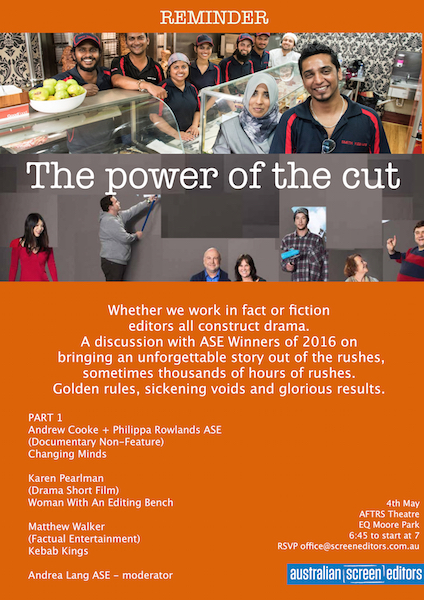