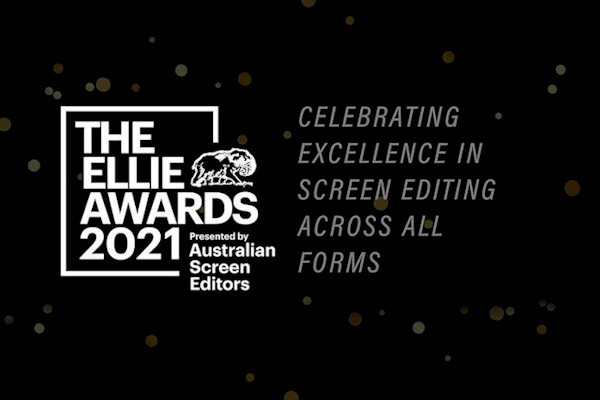 We were so looking forward to getting together to celebrate the 2021 Ellie Awards, alas COVID-19 had other ideas so we made the tough decision to host them online.

As you know, we delayed until February in the hope that Members and sponsors from all across the country would all be able to get together in person. However, given the uncertainty around COVID-19, we thought would be irresponsible to proceed. The safety of our Members and the protection of everyone's livelihoods is just too important.

Of course the show must go on - there’s never been more need to celebrate all that's great about the Australian editing community. So a small dedicated group worked hard over the holiday season to transform the planned live event into an online production. Hosted by ASE President Danielle Boesenberg and Vice President Scott Walmsley, the evening ran very smoothly, aside from the renegade champagne bottle. Thank you again to everyone beavering away behind the scenes, including our many wonderful judges. 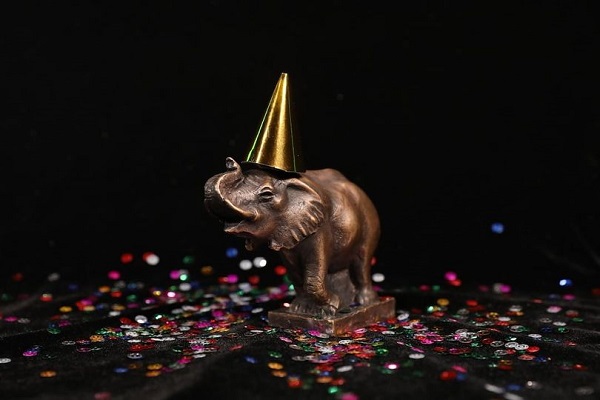 (Party Ellie ready for the festivities.)

The first Ellie of 2021 was the Beatbox Award For Best Editing In Current Affairs,
which went to Peter O’Donoghue for his work on 'Foreign Correspondent' - "#WhatsHappeningInMyanmar". 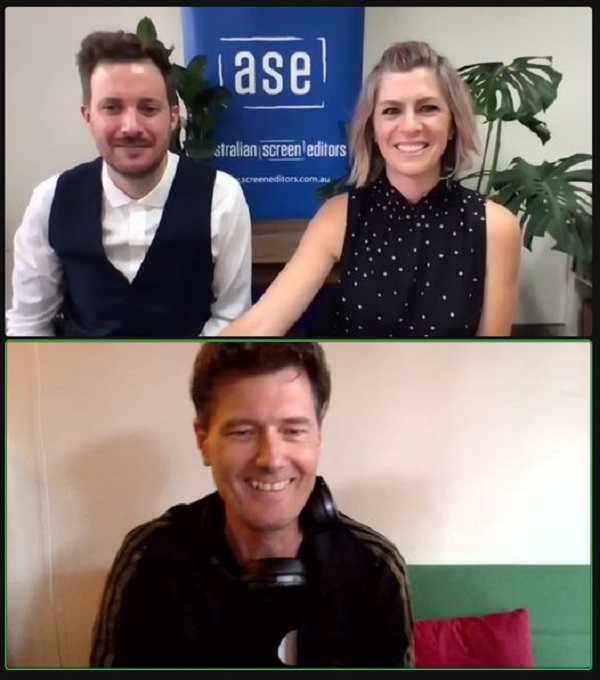 (Scott and Danielle with Peter O’Donoghue.)

The AFTRS Award For Best Editing In A Short Drama went to Tania M Nehme for her editing of 'Ayaan'. Alas, Tania wasn't able to attend the awards.

(Trevor Jamieson and Babetida Sadjo in a still from 'Ayaan'.)

The Solid State Award For Best Editing In A Comedy was won by Nicholas Holmes ASE
for his work on 'The End' Episode 6. 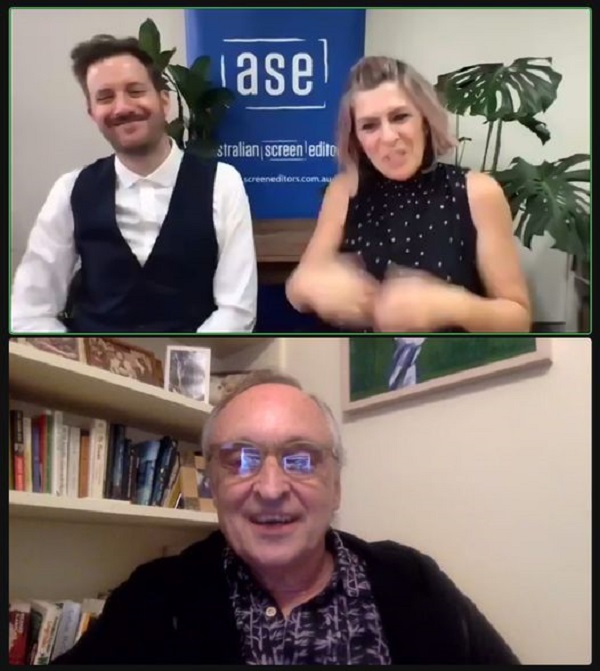 The Digistor Award For Best Editing In Open Content was awarded to Mark Bennett
for his editing of 'Yellow Jack'. Unfortunately, Mark wasn't able to attend the Ellies. 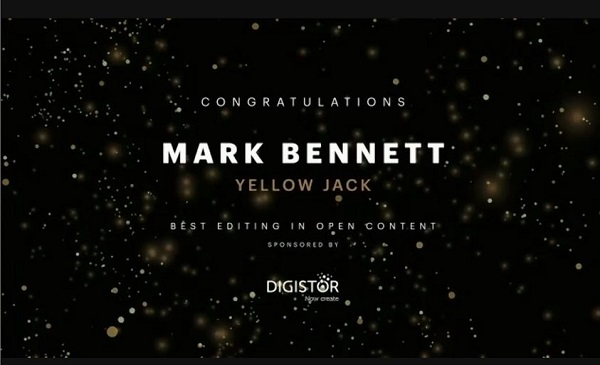 The ASE Award For Best Editing In Music Video went to Lucas Vazquez for his work on the video
for 'The Other Black Dog' for Genesis Owusu. 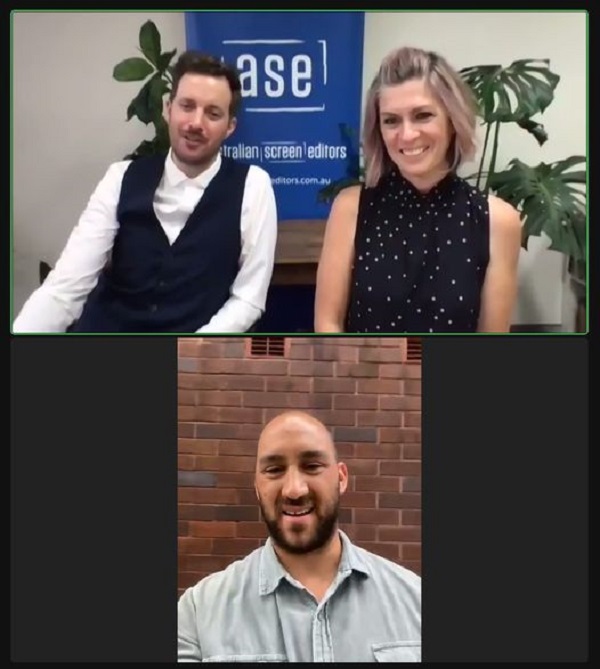 (Scott and Danielle with Lucas Vazquez.)

The winner of the Blackmagic Award For Best Editing In A Commercial was Joseph Morris,
the Editor of  Jaeger-Lecoultre. 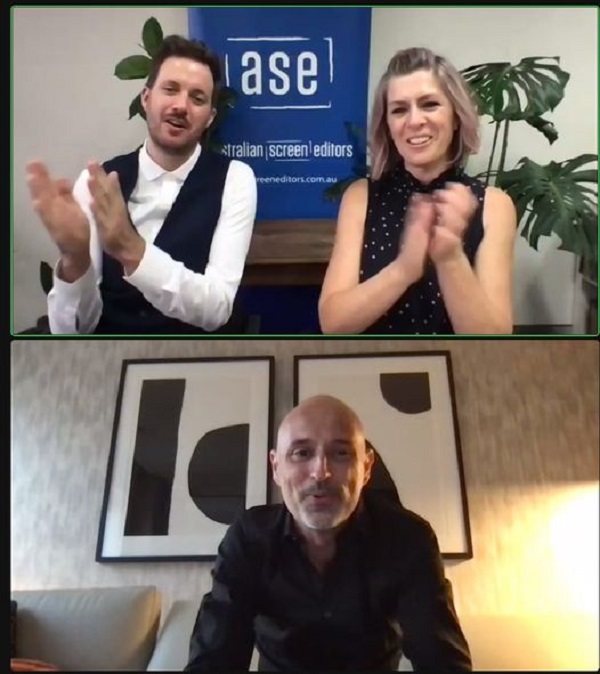 (Scott and Danielle with Joseph Morris.)

The ASE Award For Best Editing In Corporate & Branded Content was won by Lily Davis
for her editing on ANZ - ‘We Do How'. 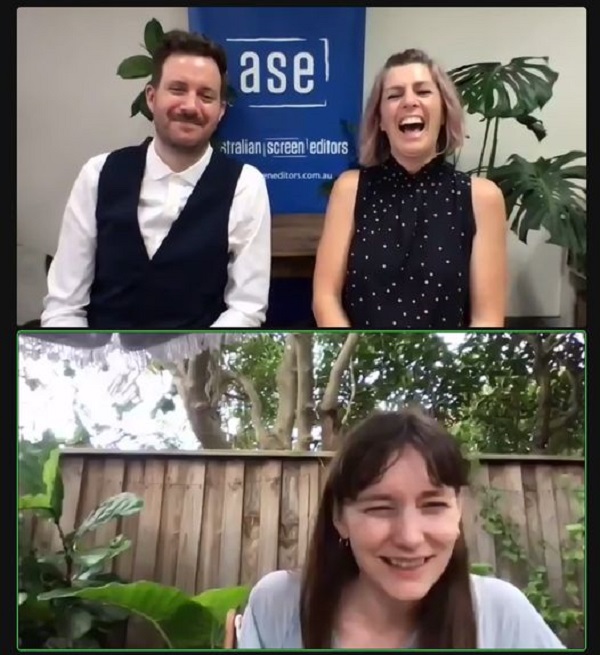 (Scott and Danielle with Lily Davis.)

The Endemol Shine Australia Award For Best Editing In Reality was awarded to Guto Roberts
and Sebastien Carew-Reid for their work on 'Australian Survivor' Season 6 Episode 1.
Alas, Sebastien and Guto weren't able to attend the Ellies. 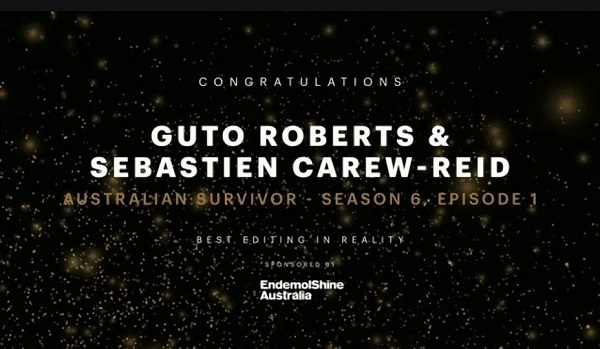 The Adobe Award For Best Editing In Factual Entertainment went to Karen Crespo for her editing
on 'Old People’s Home for Four Year Olds' Episode 1. Karen also wasn't able to attend the Awards. 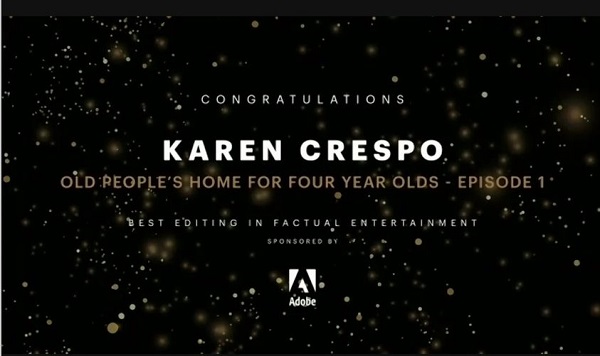 Somewhat controversially, the Videocraft Award For Best Editing In A Documentary & Series
was awarded to two entries -  Lile Judickas for her editing of 'Exposed: The Ghost Train Fire' - Episode 1,
and Melanie Annan and Christoph Wermke for their work on 'Three Songs for Benazir'!
Unfortunately, Lile wasn't able to attend the Awards. 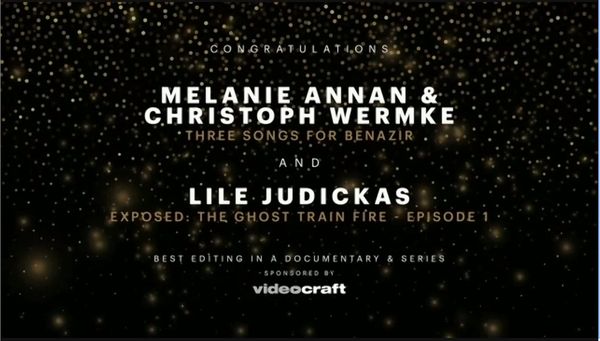 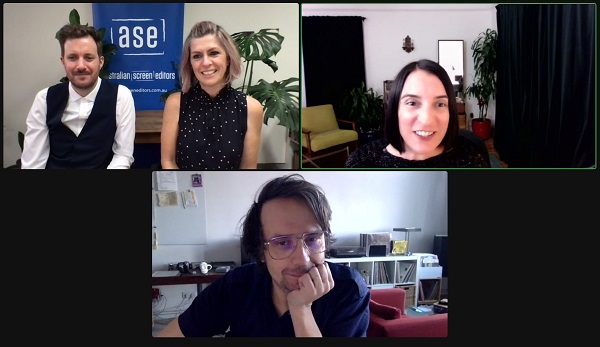 (Scott and Danielle with Melanie Annan and Christoph Wermke.)

The Blue Post Award For Best Editing In A Drama went to Gabriel Dowrick
for his editing of 'Wakefield' Episode 8. 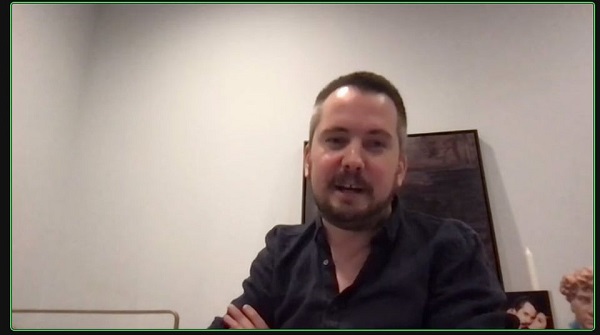 (Gabriel Dowrick at home at the Ellies.)

The Audio Network Australia Award For Best Editing In Documentary Feature was won by Tania M Nehme for her work on 'My Name Is Gulpilil'.  Tania's second Ellie for the night! Alas, Tania wasn't able to attend. 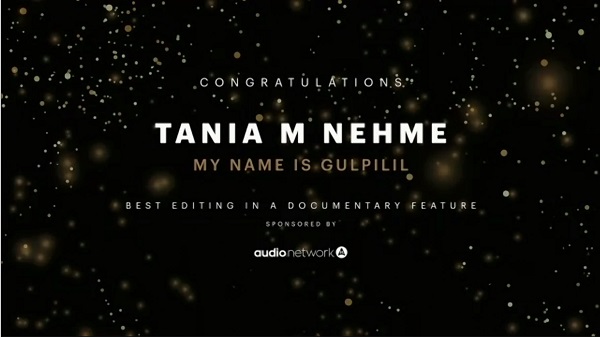 The final Ellie for the evening, the Avid Award For Best Editing In A Feature Drama,
was won by Nick Fenton for his work on ‘NITRAM’. 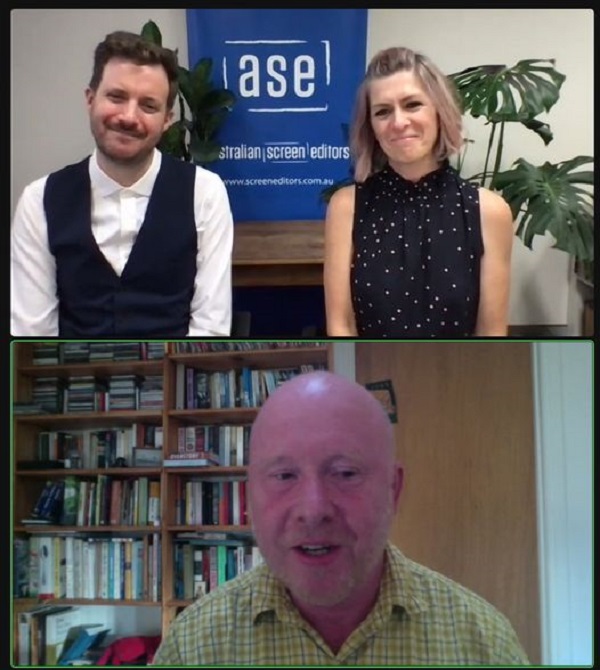 (Scott and Danielle with Nick Fenton.)

Thank you to everyone who was able to attend the online ceremony. The silver lining to the cancellation of the 2021 live event is that the organisation for the 2022 Ellies is well underway, with the talented Nakkiah Lui ready to host the ceremony at the wonderful location of the Australian National Maritime Museum in Darling Harbour, Sydney. We look forward to seeing everyone there in December. 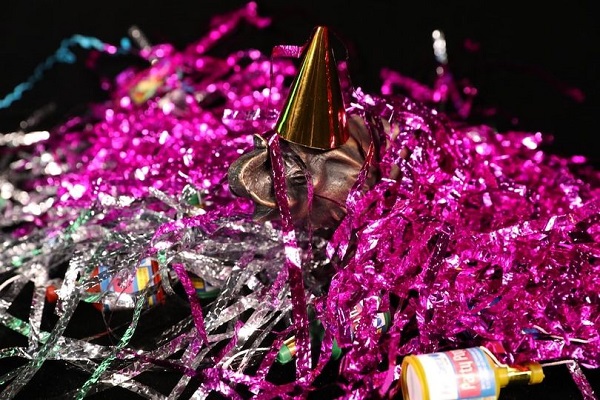 Australian Screen  Editors Guild Accreditation is a bit like an honorary degree. Henry Dangar ASE, the first president of the guild, described it thus:

For an Editor to receive an ASE Accreditation, it is a very high honour.

In 2021 Accreditation was given to recognise the talent, careers and contributions of three guild Members -
Andrew Cooke ASE, Adrian Rostirolla ASE, and  Federico 'Riccy' Felixberto ASE. 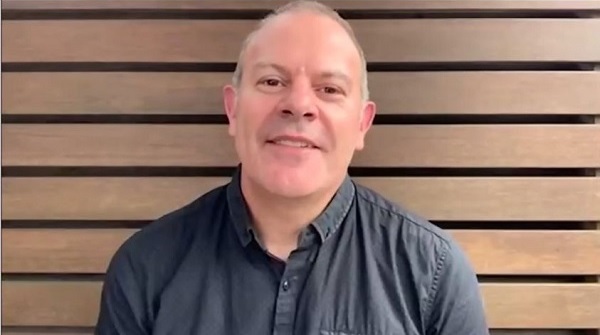 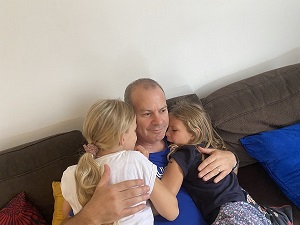 An Editor with over 20 years of experience, Adrian Rostirolla has been nominated for eight Australian Screen Editor awards, winning in 2008 for short film “The Ground Beneath”. Working across factual, documentary feature, television drama and feature drama, Adrian’s credits include documentaries ‘A Cinematic Life’ and ‘Playing with Sharks’, feature films ‘Kokoda’ and ‘Infini’, and television dramas ‘Love Child’ and ‘The Secrets She Keeps’. Adrian’s work has travelled the world, picking up a BAFTA and Oscar, AACTA, Logie and International Emmy nominations along the way.

(Adrian being congratulated by his daughters while watching the Ellies.) 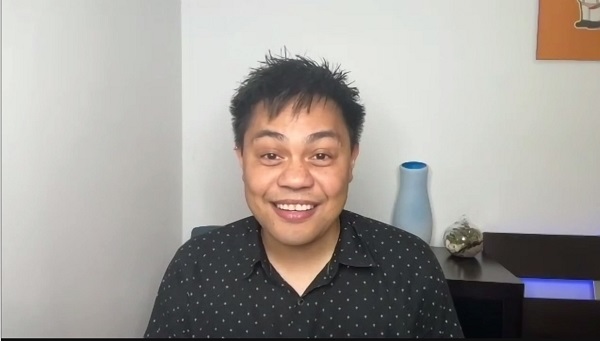 Reality and factual Editor Federico Felixberto, more commonly known as Riccy, is described as the industry standard when it comes to editing excellence, with credits on 'MasterChef Australia', 'The Biggest Loser', 'Australia’s Got Talent', 'The Voice', 'Australian Survivor' and 'LEGO Masters Australia', amongst others. With two Ellies for Best Editing in Reality under his belt, "There are a myriad of programs that we all love to watch, that can all be traced back to Riccy's vision as the ep 1 Editor in a dark edit suite somewhere - formats that we have grown to love that have not just been 'cut' by Riccy, but developed and nurtured and realised from his brilliant mind," says Stevo Petkovic, Executive Producer. "I always say, you could perform open surgery on his edits; they're precise, clean and delivered with purpose… It's that intricate thought process, that brilliant brain that can see things that don't exist yet... they only exist once he creates them." 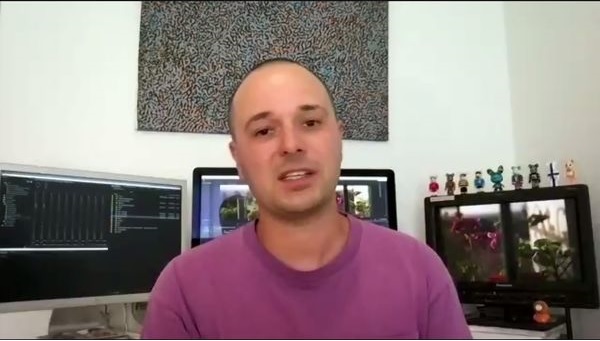 With work that has won BAFTA, AACTA, Walkley and Australian Screen Editor’s Guild awards, as well as countless other award nominations, Andrew Cooke has spent over 20 years crafting stories in factual and documentary, from 'Australian Story', to the ground-breaking 'Changing Minds'.

Andrew says “The key to successful editing is a transfer of emotion. This is my guiding philosophy. My approach to editing is always steered by a moral obligation to the contributors who allow us to tell their stories. As filmmakers we ask them to bare their soles, intimately letting us into their lives. To tell their stories is an honour which cannot be taken lightly."