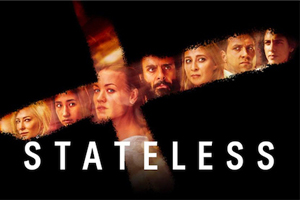 On the evening of January 24, Martin Connor ASE and Mark Atkin ASE took part in an online forum organised by the The Association of Swedish Film Editors to discuss the editing of the ABC/Netflix series 'Stateless'.  The series, based in part on the real life story of Cornelia Rau, tells the story of a cult escapee, refugee, office worker, and bureaucrat who become intertwined at an immigration detention center.  Martin and Mark edited the six-part series in Adelaide between May and October 2019.  After screening on the ABC in March 2020 it screened on Netflix internationally where it came to the attention of our colleagues in Sweden.

Tell Aulin and Pablo Labañino organised the forum which was part of an annual seminar on editing where Editors discuss their work. Due to COVID-19 the seminar was held online this year but that meant Martin and Mark could join in from far away Australia.  For a couple of hours, the forum was hosted by Editor Kersti Grunditz with 27 members tuning in via Zoom to listen to the discussion.  There were also few questions from the audience.

The discussion explored the challenges of editing a complex series with multiple characters and locations which also moves back and forth in time. The Editors talked about particular sections of the story to illustrate some of the ways the editorial process influenced the final outcome.  For example, in the opening of episode one the script included short scenes with scripted dialogue underpinned by a song.  After numerous iterations most of the dialogue was dropped in favour of a more visual approach that didn’t overload the audience with information and focussed on introducing the main characters in their different worlds.

The collaborative process was explored in some detail.  Martin revealed how, when he joined the production after Mark and director Emma Freeman had begun work on the first three episodes, he needed to tune in the approaches already established.  The aim was to see the entire series as a whole - like an extra long feature film - rather than as a series of discrete episodes.  The close communication between the Editors continued through out process with regular viewing and discussion of sequences.

Kersti was particularly interested in the way the Editors worked with the directors and showrunner. The Editors described how they were able to contribute creatively to the structural the stylistic choices while also channeling the input of the directors and, later in the process the showrunner and producers.  Juggling the dynamics of this process was tricky and exhausting for everyone, and became even more complex once the input from the various overseas partners and networks entered the mix.  But despite this, the team were all deeply invested and were able to pull together in a respectful and productive way.

There was also interest in the broader politics of refugees and racism in Australia and how that’s reflected in the series.

It was a very engaging discussion, and Martin and Mark expressed their gratitude for the interest in their work.  It was a rare opportunity to share experiences and just have some direct contact with international colleagues.  It’s perhaps surprising how similar much of our experience actually is too.