Nicholas Beauman is highly regarded as one the best film editors in Australia.  Born in London, his family moved to Australia when he was two.  Nick grew up in Sydney, and headed back to London when he finished school.

Nick started his illustrious career in 1960.  His first job was as a trainee film printer at J. Arthur Rank’s  B &W Film Laboratory in London..  A year later he headed to Montreal, Canada where he stayed for two years working as a film printer and then an optical printer, a highly specialised and complicated business for anyone who does not remember.

Nick returned to Australia in 1963 and went to work as an optical printer for Colorfilm, and then at Paddington Films. Meanwhile he signed on for the two-year Film and Television course at North Sydney Tech, a fertile training ground for thousands of Sydney filmmakers.

His first job in the cutting rooms was as an assistant editor with Eric Porter Productions in Redfern.  It was 1965 and the company specialised in animation over live action.  They had three directors all cutting their own jobs but within six months Nick was cutting for all three of him – Nick had found his calling.

Three years later, Nick left Eric Porters and went to edit the TV series Woobinda Animal Doctor, under supervising editor Brian Kavanagh.  The series ran for 39 episodes.  By this stage Eric Porter had built a big new studio facility in North Sydney and he asked Nick to run the editing department - Eight cutting rooms and a neg matching department - Still specialising in animation and doing a lot of commercials.  As Nick remembers it;  ‘My two periods of working for Eric Porter were just wonderful. He looked after me;  gave me an enormous amount of freedom, encouraged me to direct,  and was always incredibly supportive.’

In 1972 – Nick went into partnership with Hans Pomeranz,  as co-director of the post production house Spectrum Films.  Over the next fifteen years Nick edited at Spectrum, primarily as a commercials editor but gradually moving into other genres, documentaries, short dramas, music video clips and eventually features.

Nick cut his first quality drama in 1976, when Gillian Armstrong approached him to edit her film, ‘The Singer and the Dancer’.  Nick’s first feature was John Power’s  ‘The Picture Show Man’ - An Australian Classic.  Nick then edited Gillian’s first feature, ‘My Brilliant Career’.  My Brilliant Career became a world-wide hit and launched a few brilliant careers, including Nick and Gillian’s. Thus began a long and fruitful collaboration, creating no less than ten feature films and four feature documentaries together so far.

Nick successfully made the transition from film to digital editing in 1991 and as his reputation spread beyond Australian shores, he began working with international directors and producers in various countries around the world.  Whilst Nick has edited across all film and television genres – He is most renowned as a feature film editor having cut twenty six of them to date, and polished up a few more.

Nick has been nominated for an A.F.I. Editing Award six times; for the feature films ‘Hoodwink’, ‘Spotswood’, ‘The Last days Of Chez Nous’, ‘Cosi’ and ‘Siam Sunset’.  He was also nominated for the short drama ‘Tripe’.  He has won two A.S.E editing awards, for the feature documentaries ‘A Good Man’ and ‘Unfolding Florence’.  In 2014 Nick was nominated for best editing in a Television Feature for ‘Carlotta’ and that year was also presented with the A.S.E’s  Life Time Membership Award.

Nick is loved and respected by the many directors and producers he has collaborated with, assistants who have worked with him and indeed all of his peers in the Post Production Business.  He is well known for his generosity of spirit, both personally and professionally, for his open mindedness, his interest in people and the world around him, and for his wonderful sense of humour. 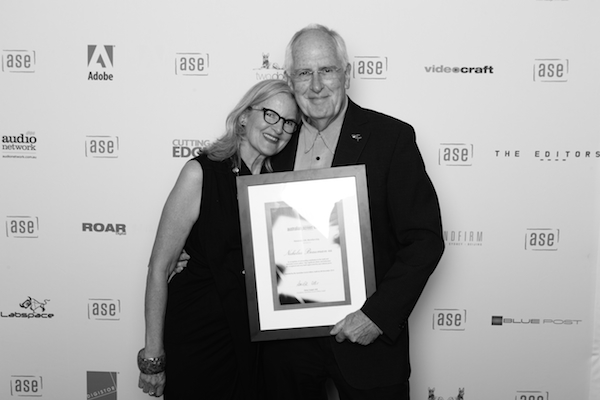