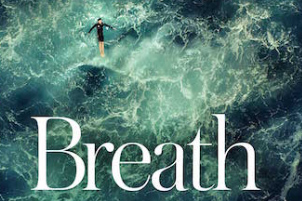 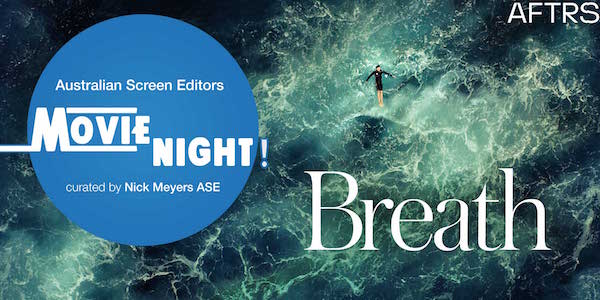 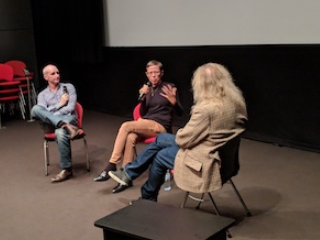 After the screening, Nick Meyers ASE chatted with Editor Dany Cooper ASE and First Assistant/Associate Editor Laurie Hughes (assisting and cutting).  The film is based on a book of the same name by Tim Winton, and Dany confessed she was worried about how to translate Winton’s prose, in particular how to convey the feeling of danger.  (They did fine.)  Another challenge for the Editors was that the two young leads were not professional actors.  Director Simon Baker decided it would be easier to teach surfers to act, than actors to surf, so he took them under his wing (much like his character in the film) during the shoot, but their performances were a bit uneven.  Their surfing was great!

The water cinematography was impressive - two cameras on the shore and three in the water (along with the sharks) which resulted in miles and miles of footage, with Laurie pulling selects and a second Assistant, Daniel Richardson, bought in to help Laurie. The surfing sequences were the hardest to cut as the ocean wouldn’t follow the script, the waves were pushed in on, tilted and stretched, manipulated to look bigger and more daunting but still had to look realistic.

There was lots of experimentation with the film’s narration as to its positioning, and it was even dropped entirely at one point.  Author Tim Winton did the temp and did it so well they ended up keeping him as the film’s narrator.  Tim was one of the co-writers of the screenplay as well but stayed away from post in general until invited to a screening close to lock-off. 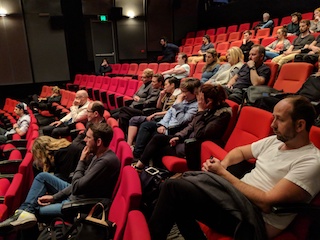 The film was shot on location in WA, Dany and the post crew stayed in Sydney.  It was a 36-day shoot and neither Dany nor Laurie could remember how many weeks after the shoot they had to lock-off - somewhere between 16 and 19. A good length facilitated by an American producer who was smart enough to let them take the time they needed, and the fact that director Simon Baker was also one of the producers.  Dany had two weeks after the shoot to get her Editor's cut ready to show Simon, and they didn’t show anyone anything until week 12.

Robert MacKenzie did a brilliant job with the sound design, and each wave had its own sound. Dany created a couple of scenes where the soundscape goes completely silent, she had to negotiate well to keep them as such, and was involved in the mix all the way.  Dany cut with temp music - she doesn’t always cut with temp music but did in this case. The composer was Harry Gregson-Williams.  As well as rushes, Laurie did sound FX and music placement, and cut whatever scenes Dany passed his way. He was also responsible for the manipulation of the waves.

About 40 people turned up for the screening - a 50/50 mix of ASE Members and Friends, and the AFTRS students.