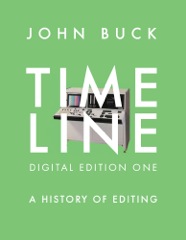 More than six years ago ASE member John Buck began researching the story behind Avid, and ultimately decided to document the full history of editing and editors back to the late 1800s.

The work became a text only book, split into two parts that was sold on Amazon and Apple iTunes through 2010-2012. Several people suggested taking the book to the next level, and to make it as compelling visually as editing itself is.

A digital version of Timeline:

I spent almost seven years in between editorial assignments, researching the history of editing and editing equipment. On a trip to Boston, I had a long chat with Bill Warner the founder of Avid (who has become a mentor and friend to me). I explained that the book at that stage was only text, and I had accumulated hundreds of images, photographs, brochures and videos. I was going to wait until somebody released software that would let me create an enriched book, so that Timeline mirrored the visuals of the editing craft. He replied

"The book that you've shown me isn't perfect and it never will be. Set yourself a date, and ship the best product you can at the time, and then update it as technology evolves. It's what we did with the Media Composer."

So I set a date and released the first version of Timeline as an ePub text only book on Amazon and Apple iTunes. I began to prepare a print version because because that seemed the natural progression without an affordable digital book platform in sight. Then Apple released the iPad and soon after the iBooks Author software package.

Bill rang me from Boston that night.

"Well your technology has arrived. Are you ready?"

I quickly contacted Tarek Atrissi, a super talented designer, and we worked on a clean book layout and a chronological timeline to give the reader a sense of time and place when reading. The new software also allowed me to embed animated patent drawings, scale historical photographs and import the audio from interviews right onto the page. 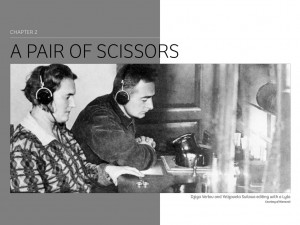 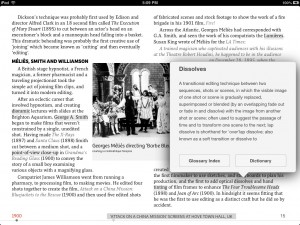 There were a couple of surprising revelations that came out of the research. One was that 3 out of the 4 key people who helped invent modern electronic editing had little or no editing experience when they began building their products.

Ron Barker had flown remote controlled helicopters and wondered why online video editors in the Eighties were always looking at a screen and timecode and not the images on the monitors, like their film editing peers. He reasoned if he could fly a model chopper without looking at his hands there must be a way to translate that to electronic editing.

Randy Ubillos had dabbled in a few weeks of Umatic editing at school but he wrote a computer based editing program in his spare time to help demonstrate his then employer's hardware digitizers. His program ReelTime morphed into Adobe Premiere and then Randy went to Macromedia and wrote Final Cut, and then was brought to Apple by Jobs to create Final Cut Pro. One guy who wasn't an editor.

Another thing I learnt was that film editing didn't begin with the American made Moviola. And how it began sounds like the start of a bad joke.

There was a German anthropologist named Dr. Odo Deodatus Tauern who joined forces with Arnold Fanck who held a PhD in geology, and made mountaineering films and camera operator Sepp Allgeier to create a production company called Berg Sports film. They joined up with Dr Nikolau Lyon to build a hand cranked 35 mm film camera that was better suited to the high altitude and freezing conditions where they made their films.

In the early months of 1926 Tauern and Lyon made a manual splicer that held film clips in place for an editor to slice them with a razor blade. Frustration with that device was the catalyst for the Germans to build the first dedicated editing device called the Lyta with a glass viewer and hand winds. 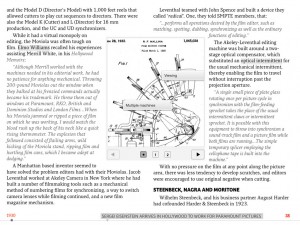 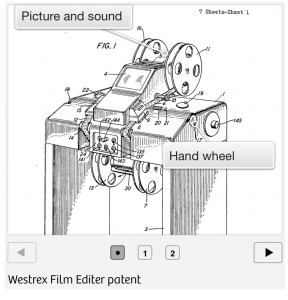 I think there are many tremendous books on the creative editing process like "Editing and Post-production" By Declan McGrath so I focused on something hat no one else had written of. How editing came about, and how it has changed and been changed by technology. For example many authors have asked Thelma Schoonmaker about the specifics of her editing on Raging Bull and The Aviator but I asked her about the KEM flatbed in her suite, her editing machine, her work companion of sorts.

She smiled and spoke for thirty minutes about the early days of cutting Woodstock on the first KEM in the US and how she, and a production team that included a young Martin Scorsese used its capabilities to define the multi screen visuals for Michael Wadleigh's award winning film.

Although the new version of "Timeline" is iPad only, this platform does offer me a few advantages not seen on the other book stores. I am able to add new images, interviews and any kind of material to the book in the same way I drop a new clip into an editing sequence, and then export it.

For example I have completed a new section on Alfred Hitchcock's long time editor George Tomasini, and then a film historian granted me rights to reproduce photographs from the early film editing days that have not been seen before. Added to this a reader sent me the original from David Bargen to create the EDL format, and yet another reader corrected an error in the text.

I was able to add and amend the book in real time free of charge, and then upload it to iTunes. The next time a reader logs in, they will see an updated version of the book, and a new reader will see a book that is always new.

I guess you could say "Timeline" is truly an evolving nonlinear story.