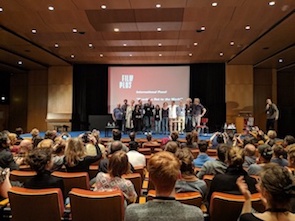 In late October I was lucky to be invited to a  Film Editing Festival in Cologne called Film Plus which celebrates the art and craft of film editing. The festival is primarily for a German audience, but attached to the festival is an International Film Editors Forum (IFEF). 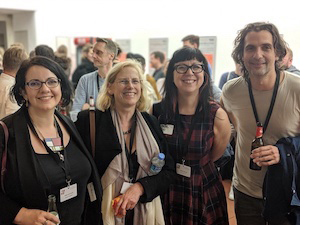 With 40 Editors from 20 countries attending IFEF, Australia was well represented with Luca Cappelli, Cheryl Potter, and myself representing Australia, with Emma McCleave acting as double agent, representing both the UK as well as Australia. Both Cheryl and Emma are currently working in London, so it was great to hear about their work and catch up.

IFEF is intended as a networking event for Editors from across the globe, and the majority are guild members. The Forum was set up so that we had maximum opportunities to get to know each other, the work we do, and included a  “World Café” style session where we speed networked and discussed different topics in order to get an insight into the things we all do as associations for our members.

Many countries were trying to raise the profile of their members and their craft, getting recognition as co-creators, with some countries even receiving royalties for Editors. Pub sessions and get-togethers were seen as important, with Germany holding meetings on set nights each month so members were guaranteed a networking event with interesting topics of discussion on those nights.

It was discussed that Editors need legal support. Minimum rates for Assistants were seen as being very important, with the Germans meeting up once a year for all members to discuss minimum rates. Close relationships with unions was seen as important, with some guilds also being unions.  It was sad to hear that in Finland Assistants are a thing of the past, that their Editors do all technical and set-up work themselves.

There were some fabulous things mentioned that were being done, such as the French putting together a White Book for post-production, Canada has a regular editing podcast, The Editor's Cut, and a few countries have publications and books celebrating their Editors.

To continue the work of the Forum, an International Organisation of Editing Associations was formed, called TEMPO, which aims to be an ongoing vehicle for organisations to share ideas and information, achievements and set backs. Topics discussed included the possibility of sharing existing surveys as well as doing an international survey, an international editing award, and a desire to share each other’s information and experiences. There was a massive sense of being with “family” dealing with the same concerns and issues and wanting to find ways to share and support each other across the globe. 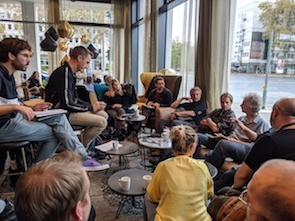 Each year the festival has featured a guest country, including Belgium, Denmark, Poland, France, Sweden, and Italy. This year it was the US, screening  Ang Lee’s 'The Ice Storm' with Editor Tim Squyres talking through his experiences editing the feature. Australia has been asked to be guest country for next year, so we need to hit the funding bodies and see if we can get some support to transport some great Aussie talent over there next year! 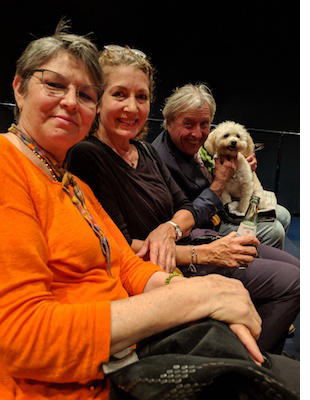 And just to prove that we were actually in Europe, Patricia Rommel (Editor of 'Never Look Away') brought her dog Snow to every event, including screenings!