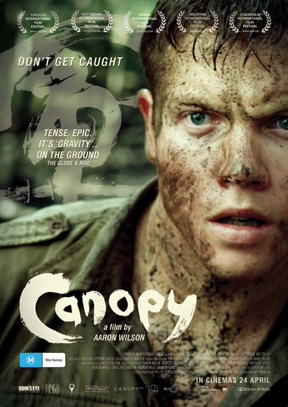 It was a cold Melbourne day as an excited crowd gathered to watch Aaron Wilson’s first feature Canopy in the comfort of wood grain and leather at Backlot’s state of the art 80 seat cinema. Eight years in the making, Canopy is set in wartime Singapore 1942.

An Australian fighter pilot is shot down and struggles to survive and evade capture by the Japanese as he navigates the dangerous jungle. The film, through his eyes, explores the impact war has on humanity that transcends language and cultures.

After the screening Cindy Clarkson was introduced to the audience which also included director Aaron Wilson and producer Katrina Fleming. Cindy dived straight in the deep end by asking the audience what they thought of the film. It was like the opening bid at an auction and no one wanted to start, then after a laugh from Cindy came a voice. “I loved it”, from a younger audience member, “I really liked the sound”, said another and “It was really different”, from a dude in the front row.

“How did you construct the soundtrack?” was one of the first questions Cindy responded to by saying about half way through the edit the opening minute soundscape was placed at the head of the film. This helped set up the expectation of the extraordinary sound design that is a large component of the film. All Aaron’s films have an extensive soundscape and this was no exception. From the 5th edit there were 28 tracks running of location audio, sound effects atmos, and breath tracks added to help guide the pacing of the film for the remainder of the 10 week edit.

Everyone was impressed by Cindy who opened up her laptop and beamed the timeline of her successes and her failures up on the big screen and showed us carefully prepared options of shots, different cuts and edit versions in order to explain how the edit evolved. Cindy showed how she played with her favorite Locked off shot to superimpose her ideas and images of a character within the frame.

The questions kept coming, how much of a script did you have? Did you use every shot? What was the shooting ratio? As Cindy answered these and many more she was in her element informing, entertaining and giving away her honesty and integrity that she takes to the edit process. When she could she deflected questions like “how did you get Crowd funding?” on to the producer Katrina who discussed this at length.

When someone asked Cindy about Charles “Bud” Tingwell’s involvement in the film she turned to Aaron who said that Bud had been in the Air force in the 2nd World War and had spoken to him about other pilots and that these stories of his mates should be told.

It was a great afternoon enjoyed by all and after the Q&A was over many stayed to listen to Cindy, Katrina and Aaron and the bar was open.

For those people who missed the film here are the cinemas screening Canopy in Australia.

Launching at these locations: