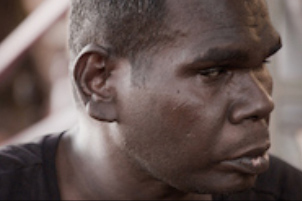 Aboriginal and/or Torres Strait Islander peoples should be aware that
this article contains the image and name of someone who has passed away.

With documentary biopics, there's a temptation, even a sense of duty, to cover every event in a person's life. While informative, overwhelming the audience with a checklist can obscure the lessons and insights their life could gift us.

This was especially true of Gurrumul, a pivotal figure in Australian culture who led a rich, well-documented life. Telling his story from a Yolŋu perspective, rather than the perspective of a balanda (a white person) was deeply important to us, so finding the right insights and messages to focus on was critical.

It turned out to be challenging for a few reasons. Firstly, before principal photography even began, we had hundreds of hours of archival footage including coverage of his time in Saltwater Band and Yothu Yindi, extensive footage of his solo tours, as well as movies on both VHS and 8mm film. He even popped up in a Bill Peach documentary on Elcho Island from the '70s. The second challenge lay in Gurrumul's shyness and reluctance to be interviewed, even for this documentary he had a hand in producing.

For our first pass on the film, we cut rough scenes from all of the available footage, covering all of these significant events and moments in his life. This gave us about 12 hours of serviceable scenes. However, without insight from the subject himself, how could we pick the right narrative threads and tie the film together?

This glue lay in the contributions of his family, most significantly Susan Dhangal Gurruwiwi, his aunt. Her insights into Gurrumul's life and Yolŋu culture, paired with her poetic turn of phrase, guided us to the most critical moments in his life and gave us a framework around which we could structure the film.

As we honed the cut, mp3s of each version (35 in all) were continually exported and sent up north to Gurrumul, so he could send back approval or advice. This became critical towards the end, as we moved into sound post-production.

Every musical performance during principal photography was captured with individual audio stems for each musician and remixed for the final edit by a variety of producers. As a big movie buff who loved going to the cinema for the aural experience, Gurrumul’s insights into cinematic sound were profoundly impactful.

In the end, shortly before his passing, he and his family approved the final edit. They expressed that they felt the film did justice to their culture and his legacy - our desired result right from the start. He also delivered the highest of compliments in saying it was his 4th-favourite film of all time, after "Snakes on a Plane", "Anaconda" and "Anaconda 2".

(Shannon Swan and Ken Sallows ASE were nominated for the Audio Network Award for Best Editing in a Documentary Feature for their work on "Gurrumul".)