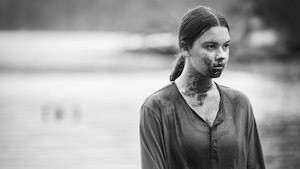 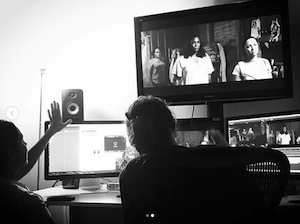 "Dark Place" is an Indigenous Horror Anthology commissioned by the ABC and Screen Australia (in collaboration with AFTRS) as part of the ‘Shock Treatment’ initiative — a program designed to find and foster new Indigenous Australian filmmaking talent. It comprises five chapters which are being released in both feature format and individually as stand-alone pieces. I was brought onto this project by producers Majhid Heath and Hayley Johnson of Noble Savage Pictures, after having collaborated with them last year on the series "A Chance Affair".

I edited four of the five chapters in the film ("Foe", "Vale Light", "Scout" and "Killer Native"), while Lawrie Silvestrin ASE edited the fifth segment ("The Shore").

When Majhid got in touch to see if I’d be interested in coming aboard "Dark Place", I didn’t hesitate. Despite the episodic structure, it was still essentially a project with the demands of a feature edit, but after a wonderful working history with Noble Savage, I was itching to get onboard. I was especially eager to get back to Spectrum Films at Fox Studios, where I had formed some close professional friendships over the past few years. Heading back in to work with Catherine Armstrong and her team felt like coming home, and the whole experience was of the highest level of professionalism.

"Foe" was written and directed by Liam Phillips, and follows Leonie Whyman’s character of Elena as she struggles with a sleeping disorder that slowly reveals itself to be a symptom of a supernatural presence. "Vale Light" was written and directed by Rob Braslin, and follows a mother and daughter (played by Tasia Zalar and Jolie Everett) who move into a new housing commission, only to begin to suspect that their mysterious neighbour is harbouring malicious intent. "Scout" was written and directed by Kodie Bedford, and chronicles the efforts of a series of kidnapping victims (lead by Katherine Beckett) who seek to confront and escape their kidnappers. Finally, "Killer Native", written and directed by Bjorn Stewart, showcases the misadventures of a young British colonial couple attempting to build a new life in Australia, only to be confronted by the damage already wrought by their predecessors. Whilst all horror stories to be sure, each of the films are tonally unique and span multiple genres, with "Scout" equally leaning into the thriller genre, whilst "Killer Native" expertly uses laughs and comedy to lower the audience’s guard before a wrenching gut-punch.

It was determined early that we would be cutting on Media Composer 7. I enjoy being up-to-speed on all major NLEs, and it was nice to be onboard for another large Avid project, especially since Spectrum always helps to make the entire editorial process a painless affair.  I received the rushes for the chapters as they were shooting, and commenced work at Spectrum. Editing commenced on the first chapter as production commenced on the second, and so on. Working alongside Assistant Editor Jonathan Reed, we completed an assembly for each chapter in about one week, and I then proceeded to create my Editor's rough cuts. These were presented to the producers and directors for notes and feedback. We then proceeded to complete the director's rough cuts, which took about another week to two weeks each. After that it was a process of screening the film for representatives from the ABC and Screen Australia, and refining the film over a number of weeks, based on their feedback and our own notes and collaboration. 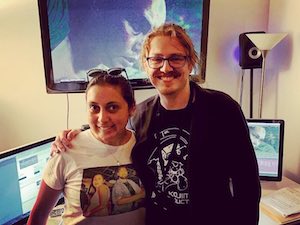 The blend of horror, comedy and serious thematics was a delicate balance to maintain, and there was plentiful discussion over the management and consistency of tone throughout the chapters. The directors, producers and myself maintained a strong, tightly-knit collaboration throughout the post on this film, and each motivated the others on to perfect the work as much as was possible.

Multiple hurdles emerged throughout editorial. One was a complaint from the prosthetics team who had worked on a corpse in "Killer Native", who stated that they were unaware that the film would be covered in the way it was, and that they were concerned that their work wouldn't appear in the best light. It was therefore a balancing act of keeping the prosthetics team satisfied with the appearance of their product, whilst still preserving the absurdist tone and integrity of the filmmaking. Ultimately, the eventual edit was the strongest choice for the final film. Likewise, concerns were raised about the strength of certain sequences in the chapter "Vale Light", and the clarity and order of the scripted sequencing in "Foe". Rigorous discussion resulted in multiple iterations of these chapters, which strengthened the storytelling and ultimate effect.

When Perun Bonser (director of the chapter "The Shore") explained that he preferred to work in his home state of WA rather than NSW, Lawrie Silvestrin ASE was recruited to complete work on this chapter. Their work was a great success and helped to complete the ultimate balance of the final film when it was submitted. Ultimately, "Dark Place" was selected to premiere at the 2019 Sydney Film Festival and Melbourne International Film Festival and will also be screening at this year’s Cinefest Oz. Working on this project was a career highlight for me, and one which has cemented lifelong friendships. It was a genuine delight.

I came on board late in the schedule to edit the chapter called “The Shore”, written and directed by Perun Bonser. It was shot in NSW but Perun needed to return to Perth after the shoot, and while Adrian had edited the rest of the anthology, the producers felt it would be better to have someone in Perth who could work side by side with Perun in the edit suite. I was happy to get the call as Perun and I are good friends and have worked together on a couple of other films.

“The Shore" stars Luka May Glynn-Cole who is Warwick Thornton’s daughter, so working with her in her first film role was quite thrilling.  She plays Selina in this dark and twisted coming-of-age story in which she and her father Barry (Bernard Curry) are besieged by an unseen assailant.  Behind the horror film is a metaphor for the struggles of a teenager coming to terms with the physical and psychological changes of growing into adulthood. As well,  there’s the emotional tug-of-war between the two opposing sides of Selina’s cultural, spiritual and metaphysical realities.

While the film was shot in colour, we decided to present it in black and white. This is partly because we didn’t want the blood and gore to distract the audience from the narrative, but also because the black and white imagery speaks to the theme of duality and the extremes of the choices Selina must weigh up.

As with all films, the edit was the final stage of the writing process and Perun and I experimented quite a bit with the structure of the film.  In the end we settled for a slightly non-linear approach with back story presented as flashback within a dream sequence within a nightmare before the final reveal about Selina’s true nature and the ultimate choice she makes about her future.

The film is 10 minutes long and took two weeks all up to edit (over about three weeks, allowing for feedback).

I edited on Avid which I hadn’t done for more than a year.  After being exclusively an Avid user for more than 20 years, about three years ago I edited a film that had already been set up on Premiere Pro.  At first I found it a bit difficult as I tried to use Premiere the way I’d gotten used to using Avid.  I found the timeline quite volitile. Whenever I moved my cursor I seemed to be inadvertently moving clips and going out of sync. But gradually I got the hang of it and pretty soon I was starting to really enjoy many aspects of working with PP.

Avid has a very stable timeline which, coming from a film background, made the transition to non-linear digital editing very easy and the editing very familiar.  Like film,  I’d first do much of the editing in my head.  I would assess the shots and sequences, decide on the structure, the choice of takes and the edit points before putting them together on the timeline. However, once I finally got used to the fluidity of the Premiere Pro timeline, I realised that it freed me up to experiment much more, to slip and slide and rearrange pictures and sound elements in the kind of “dance” that Karen Pearlman describes so beautifully in her book “Cutting Rhythms”.  Coupled with this, I began using a standing desk (for ergonomic reasons) and I found that, not only was I “dancing” with the rushes, but I was actually physically moving about in a kind of dance with the edit…go figure Prof. Pearlman!

So, in returning to Avid for the edit of “The Shore”, I found I was looking to use it like I’d gotten used to using PP.  And to my relief, I discovered the Avid Smart Tools. While they’ve been around for a number of years, I’d largely ignored them because I was using Avid the way I’d done since the early days of NLE. Now that I’d gotten used to dancing the “timeline tango”, I had a newfound regard for the Smart Tools which allowed me to slip, slide and shimmy around the timeline in much the same way I’d done in PP.

Interestingly, Perun comes from a dancing background also, having once been part of the Bangarra Dance Company, so the two of us had a ball together choreographing the edit of “The Shore”.