The idea for a winner’s night came from discussions with Fiona Strain ASE, Jane St Vincent Welch ASE and Steven Robinson ASE at the ASE Awards last year. The four winners of Drama Feature, Drama Non-Feature, Documentary Feature and Music Video agreed to hold an informal session to show and discuss their work. So to celebrate the tremendous achievements of these ASE Award-winning editors, the Victorian branch of the guild arranged a meet and greet at Music and Effects in South Yarra. 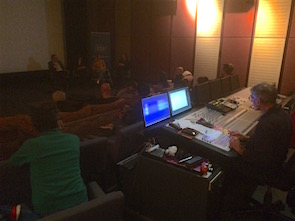 Steven Robinson ASE chaired the panel, opening with Julie-Anne discussing the  challenges she faced as a comedy Editor who got into cutting drama. The works discussed were Please Like Me and The Beautiful Lie. She spoke about the differences in projects, very tight shooting and post schedules (a 45-minute episode schedule moved into three, hour-long episodes), and having to cut scenes while the rest of the show was being shot, working around incomplete scenes.

For Please Like Me, the challenge of Episode 10 was to cut a 20-minute sequence of a busy and chaotic Christmas dinner set around a table. Dinner scenes are a bane of any Editor, let alone one that encompasses an entire episode. Most episodes on that production were given an assembly edit by her Assistant. However, owing to the complex nature of shooting such a scene - piece by piece across the camera angles, complete with overlapping dialogue - there was no assembly edit done and Julie-Anne had to start the scene from scratch. Julie-Anne relied heavily on L-cuts to smooth over gaps and sometimes broke the rules for the sake of getting there. The resulting episode is an incredible rollercoaster of funny, awkward and sad that is made even richer with that perfect timing of a pull focus right on the line.

The Beautiful Lie episode included a touching scene with no dialogue as the two leads communicated their feelings via fridge magnets.  Beyond getting the timing right as the scene crackles with anticipation for the next reveal, Julie-Anne mentioned finding the right music for the scene was quite a challenge. As an Editor, Julie-Anne also had to keep a fresh mind for the emotions that she felt when looking at the footage for the first time. Keeping notes and making markers on the footage to jog your memory later down the line was a great tip.

Ariel Shaw’s music video for the band Slum Sociable’s song All Night was born out of the strength of “a simple idea executed well".  Cheekily creeping the aspect ratio from 16:9 into 4:3 to great effect, the clip is an entertaining romp about a businessman’s dream of wanting to become a country line dancer. Owing to good direction and project management, the cut went smoothly, and the 4:3 effect was a great example of throwing something out there to see if it stuck.

Tony Steven’s Remembering the Man is a complex and ambitious project born from an archival audio recording of Timothy Conigrave’s recollections of life as a gay man during the AIDS epidemic, and detailing his relationship with John Caleo in a book he wrote called Holding the Man. Stopping and starting across three years, the project went back and forth between Tony and another Editor before funding arrived and the project got going.  An additional surprise was that a feature film of the same subject was coming out in the same timeframe.

Strong research of archival material and interviews gave this documentary tremendous depth as the project organically developed from the simple tape recordings. The re-creations weren’t intended from the start and so the edit adapted, going so far to speak the same lines as Timothy did in his own tapes, blurring the lines between archival and re-creation, and pulling you in as a result. Issues faced included how “gay” to make the film, how to remain sensitive and respectful to a person’s complex relationship, and how far can you go before it’s too intrusive.

As the project was such a deep and layered cut, note-taking was important for this project, as with any. Using notes and story cards to plot out cohesive character arcs was a valuable tool. As any Editor will tell you, organisation is the key to making a good edit great. For instance, a challenge with Remembering was having multiple interviewees who span thirty years of a person’s life. Tony had to find the key moments that punctuate a story while revealing more about the people  we are following.

Doron Kipen from Music and Effects asked Tony what does he look for when he gets a cut to mix. Tony's response was that a good Editor really goes through the sound takes and takes the time to splice in bits and pieces of dialogue from alternate mics or takes to make sure dialogue comes off clearly, even if it means dozens of layers of soundtrack to scroll through. 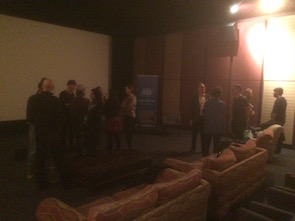 Rounding up the discussion were general questions on how people have found working in their industry of choice. For veterans like Tony and Julie-Anne, it was the change of technology and pace that digital had brought. They also offered some insight into developing working relationships with directors and how to navigate clashing personalities or even languages. For newcomer Ariel, her challenge was to get work into her show reel, often taking on projects for the experience. She found herself working around the clock, and couch-crashing to get a project finished in between working as an assistant editor professionally, including testing her limits in taking on a feature film.

Our thanks to Doran and the astounding picture and sound quality at Music and Effects. It was a an excellent location for this event.

We again congratulate our award winners for giving up their time and giving us their personal approach and valuable insights into their own editing methods. Overall, it was a fantastic night as the mix of Editors and students mingled and swapped war stories and past experiences until we ran out of time.