The day after the Ellies, the ASE, in association with AACTA, held a Meet the Nominees event where some of the AACTA-nominated Editors gathered at the AFTRS Main Theatre to discuss their nominated works.

On stage was a panel of five nominees and moderator Jane St Vincent Welch ASE. The nominees for Best Editing in Television who attended were Rodrigo Balart for 'Seven Types of Ambiguity', Episode 1, and Toby Trappel for 'MasterChef Australia', Episode 1. For Best Editing in a feature film we have Nick Meyers ASE for 'Australia Day', Merlin Eden for 'Hounds Of Love' and Alexandre de Franceschi ASE for 'Lion'. 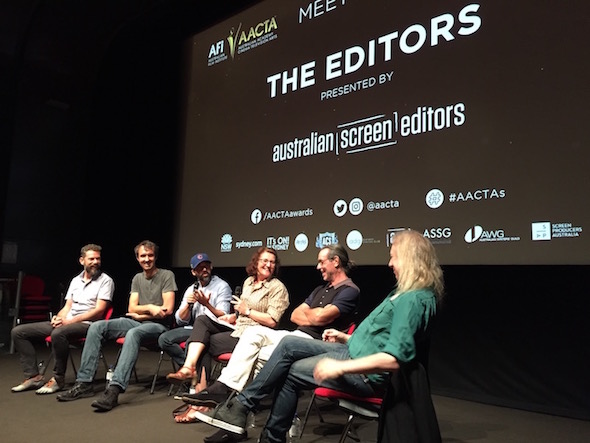 The theme this year is ‘How do you create drama in editing?’ At the start of a project you have the script and the rushes but after you assemble the script, there are more than words on the screen, so what happens then? Nick Meyers ASE began by discussing how he assembled each of the three stories in 'Australia Day', (the Aboriginal girl escaping violence, the Asian sex worker escaping an illegal brothel and the brother’s revenge story.) This was done during the shoot, which meant he saw each individual story first. Then they were positioned into script order on the time line. There wasn’t a lot of coverage, only one or two takes per scene, so there was minimal editing within scenes. If there’s only one cut in a scene, it has to be the right one which means finding the fulcrum point in a scene and making that cut count.

The main challenge was in the middle of the film where the pacing lagged, but by cutting quicker and adding more space, more tension could be created. Nick says he also ended up doing more intercutting between the stories. The drama was also built up by creating rhythms by working with the peaks and troughs within and between stories.

Jane asked Merlin Eden how he maintained the growing tension between the three characters, the husband, the girlfriend and the female victim, and how he approached that in editing terms, or was it all in the script?

Merlin believes the Editor’s main job is about deleting a lot of the footage. When he watches the rushes, he makes notes to preserve his initial emotional reaction. Once he has decided on the shots he tends to cut them as little as possible. In this film, Merlin says he lingered on shots, such as the bedroom door and used a single wide shot when Vicki is chained to the bed, to emphasis the sense of entrapment. By using a lot of ‘repeated’ time in reaction shots, and creating pauses he could build more tension between the characters.

One main challenge was that during the edit Evelyn (the girlfriend) became the main player, rather than Vicki (the victim). Evelyn’s story arc, they realised, went through a more compelling change over the duration of the kidnap, so they went with it. This did require a reshoot of one pivotal moment when Evelyn was left alone with Vicki. An amazing bit of editing. 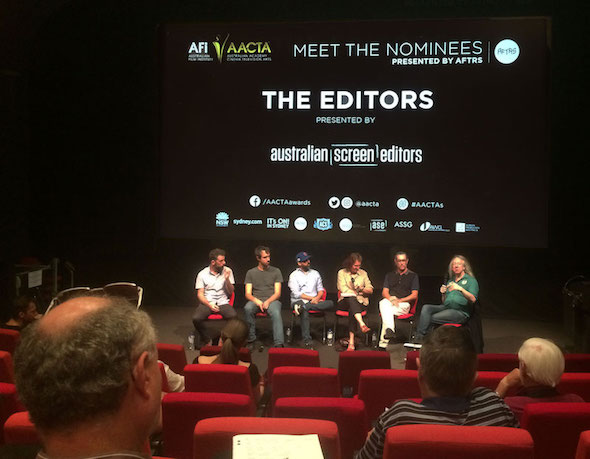 'MasterChef' is unscripted although it does follow a prescribed conceptual arc, like introducing each character and what’s at stake for them, and whether they get an apron. So how do you build drama? An added complication is that each shoot involves 10 cameras, 60 hours of footage and 21 contestants, to create 81 minutes of television!Toby Trappel says to help build the drama he creates a conceptual script at the start of each edit.  He then goes through the footage to find the positive and negative moments required by that script, and edits them together to create a flow, and a balance. Toby works with a post-producer but if they are uncertain he makes most decisions. For him clarity in storytelling helps create drama, which means sometimes getting rid of great moments if they don't fit into the script. Being ruthless is vital, you just can’t hang on to stuff.

Reality has had a stigma but now there are higher standards required in storytelling. The reality TV format in a series can be repetitive with the same structure and same judges each week. So, there is a big need to keep it fresh by changing the pace, creating montages and unexpected story arcs. Toby said one of his favourite scenes was edited by his co-nominee Karen Crespo who used slightly off-rhythm cuts to build tension until a climatic cut to the show's title which was exactly on the beat.

Rodrigo Balart was asked how he maximised a sense of mystery and uncertainty between the characters in 'Seven Types of Ambiguity', Ep 1 (Joe),

Rodrigo said that when he starts a project he never knows how he’ll edit it. In this case, the director showed him a scene from ‘The Slap’ which was shown entirely from one character’s POV, even though he wasn’t the one speaking. This created a strong sense of the character's world which gave Rodrigo a clear thesis to follow. They attempted to push this idea as much as they could by staying on Joe, no matter what everyone else was doing. Rodrigo says it's important to hold your nerve and listen to your instincts about when to cut. There are so many reasons to cut, it’s always about finding the right one.

In editing Rodrigo says it’s also important to be honest with the director about reactions to material. In one scene, he didn’t understand what the characters were talking about, so he and director created a new scene to explain it.

Rodrigo says you can break every scene down to basic factors - someone wants something, they get it, or there’s an obstacle - end of the scene. He said it's important to make the best use of all the elements of the film - the performance, camera-work, production design, etc in the edit. A character’s look or a camera movement can signal when the scene is over. For Rodrigo starting a new film is always terrifying but he always comes back for more.

Jane asked Alexandre de Franceschi ASE about the scenes in 'Lion' where there are some critical moments that are very powerful but that occur without dialogue, and how did he make them work so well?

Alex said that much of the drama was created through the audio. For example, when the young confused Saroo is in the busy Culcutta train station, there is a loud and chaotic soundscape. This contrasts with when he wakes up - it’s silent and he’s alone. Another interesting sound note is that there is no music for 15 minutes after the title sequence.

For Alex, there were two main things to remember about this movie; 1, it’s a true story so they couldn't deviate too far from the facts. 2. They had a 5-year-old actor with no experience.

All films have their own issues, editing is never easy.  'Lion' was overwritten - the original script was 260 pages long. There are two interwoven stories, the past and the present, so there was a lot to cut out. Alex said his card reads he’s a “film editor and cleaner.” He said Editors get rid of the shit as elegantly as possible. The first assembly was three and a half hours long, and it was beautiful. The distributors insisted on cutting it down.

Test audiences were very touched by the young Saroo’s early scenes and felt they were the most powerful part of the story. The result of this feedback was to use flashbacks more often than had been scripted. Alex said the secret to flashbacks is that you can put them anywhere you want to.

Alex met the real Saroo, sitting at a table. Saroo told him his story, said he was writing a book and it would be a film. He then pointed to people at the table and said, "He will direct it, he will shoot it," and Alex said, “And I will edit it.”

The nominees enjoyed the rare opportunity to discuss the intricacies of their craft. The discussion was lively and judging by the reaction of the audience, very entertaining. Thank you to all the nominees, Jane and the audience members for taking the time on a sunny Sydney Sunday afternoon to attend the event.

The 2017 ACCTA Awards for Best Editing in Television went to Rodrigo Balart for 'Seven Types of Ambiguity' Episode 1, and Best Editing in a Feature went to Alexandre de Franceschi for 'Lion'.  Congratulations to our wonderful nominees and winners! AACTA have announced their series of Meet the Nominees events!  Produced in association with the ASE The Editors event will take place on Sunday 3 December 1:30pm-2:45pm at AFTRS in Sydney.

Reserve your space now at: https://www.eventbrite.com.au/e/meet-the-nominees-presented-by-aftrs-the-editors-tickets-39824948493

Tickets are complimentary for ASE, AFI | AACTA & other Guild/Industry Organisation members and guests!