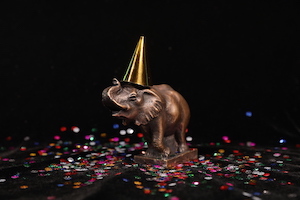 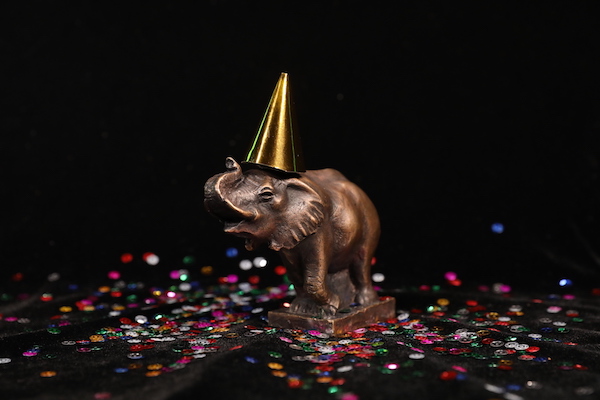 Due to COVID-19, the ASE decided to hold the 2020 Ellie Awards online, opting for mostly prerecorded segments with a few live segments. (Hey, we're Editors.) One of the huge advantages of Zoom is that Members from all over the country could attend and be involved in the live segments.  Our long-term Ellies event manager, Sophia Habib, rose to the occasion, inventing concepts like the Party Ellie and 'Ballyhoo applause' transitions to keep the ceremony flowing and entertaining. With the help of members of the Executive Committee, segments were filmed with comedian Steph Tisdell, sponsors and committee members from around the country, then edited, composited, graded and mixed.

Along with sending in clips of their work, all the nominees were asked to film an acceptance speech. The award presenters also recorded announcements for all the nominees. While this probably wasn't fun for the nominees and presenters, it meant the  ceremony maintained an element of surprise and anticipation.  The Zoom format has copyright complications which unfortunately meant that we weren't able to play clips from all of the nominated productions or the music from some of the music video entries.

The ceremony was run from the lovely offices of the Shark Island Institute - thank you to Sally Fryer ASE, Ian Darling and the other Shark Islanders for  your hospitality. 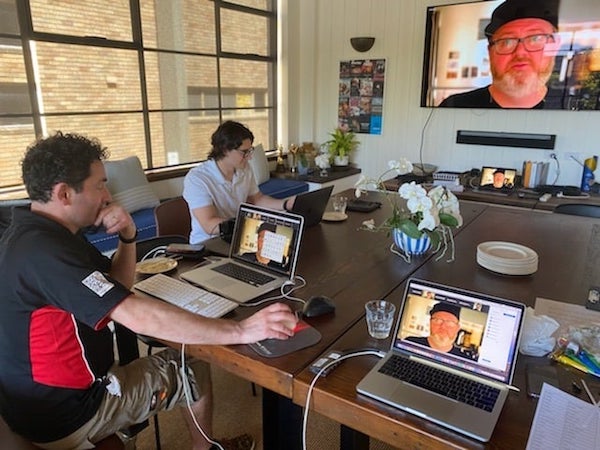 Our first Ellie Award for the night, the ASE Award for Best Editing in Current Affairs,
went to Josh McAtamney for his work on ‘Dateline’ – ‘Human Cargo’.
It was presented by Nick Dunlop, the Chair of the Western Australia ASE Committee. 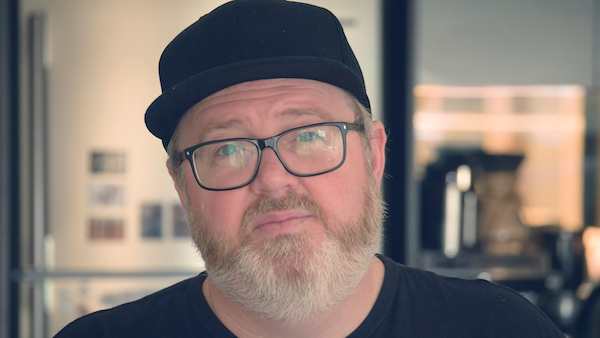 The winners of the AFTRS Best Editing in Short Drama Ellie were Michael Shanks, Kevin Luk & Chris Hocking for their editing on ‘Rebooted’. This Ellie was presented by Roland Gallois ASE, the Head of Editing at the Australian Film Television and Radio School. The trio was represented by Michael Shanks. 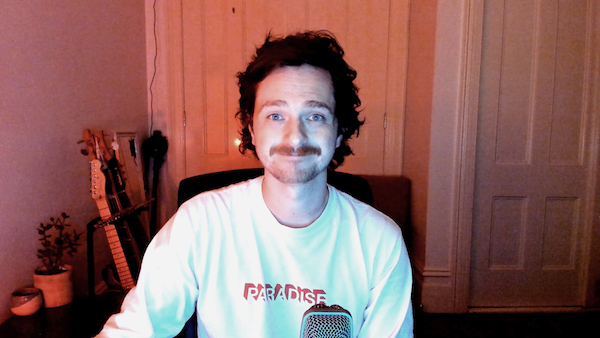 The Solid State Best Editing in a Comedy Ellie was won by Deborah Peart ASE for ‘Upright’ episode 5. The Ellie was presented by Walter Bienz, the Founder and Creative Director of film marketing company The Solid State. 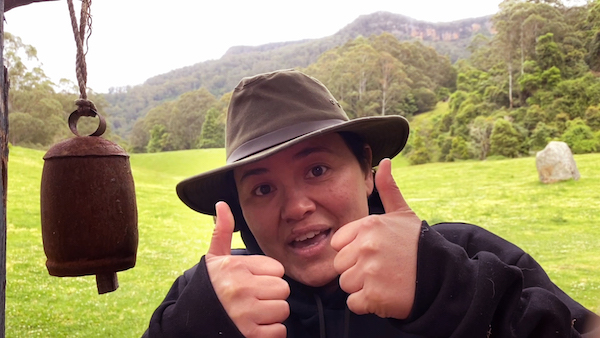 The Digistor Award for Best Editing In Open Content went to David Scarborough for his work on ‘Ice Ball’.  The Ellie was presented by Johanna Baker from Digistor. 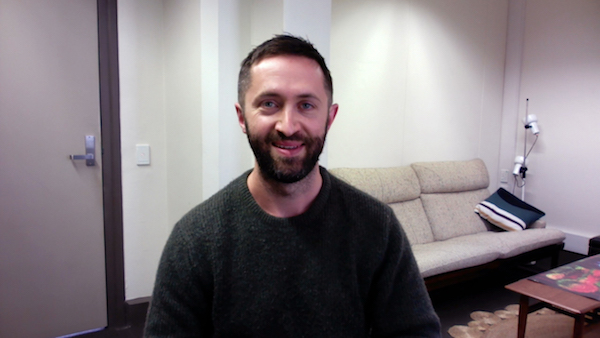 The Blackmagic Design Award for Best Editing in a Commercial was awarded to Alexandre de Franceschi ASE for his work on NRMA 'Pavlova'. Our fifth Ellie of the night was presented by Melissa Atherton from Blackmagic Design. 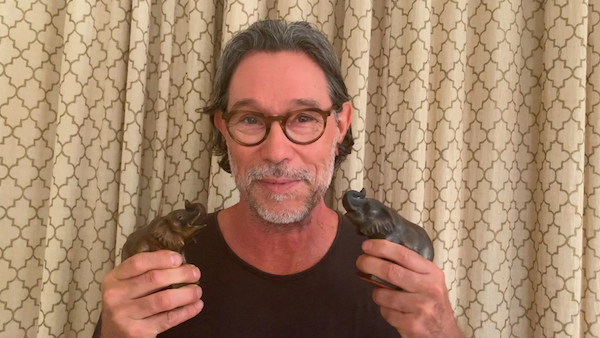 The Post Lounge Award for Best Editing in a Music Video was won by Kris Rowe for her editing on the video for the Mick Flannery song 'Wasteland'. The Ellie was presented by Kurt Royan, Managing Director of The Post Lounge. 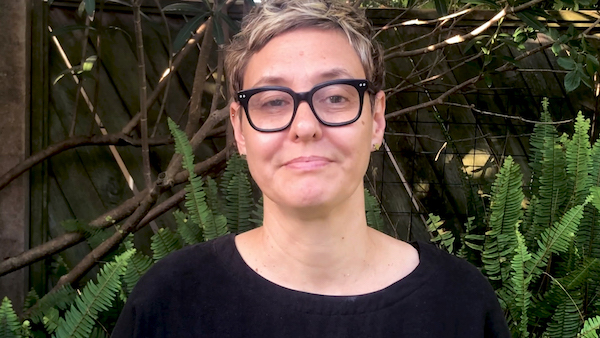 The winner of the ASE Award for Best Editing of Corporate & Branded Content is Chris Ward for his work on Transport Accident Commission - ‘Towards Zero’. The seventh Ellie for 2020 was presented by Veronica Buhagiar, the chairperson of the ASE’s South Australian Committee. 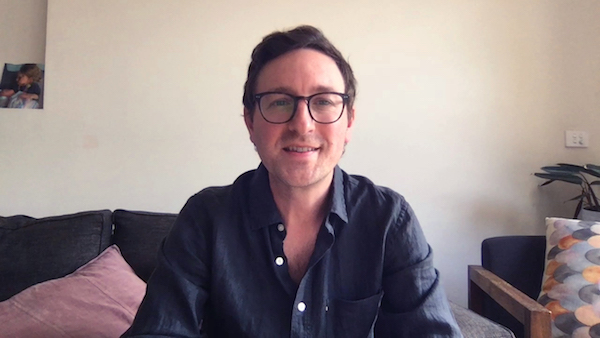 The Adobe Award for Best Editing in Factual Entertainment was awarded to Simon Callow-Wright and Rachel Grierson-Johns for their editing on ‘Love on the Spectrum’ episode 1.  They were represented by Simon because Rachel had just had a baby. (Double congratulations, Rachel!) The Ellie was presented by Jon Barrie from Adobe. 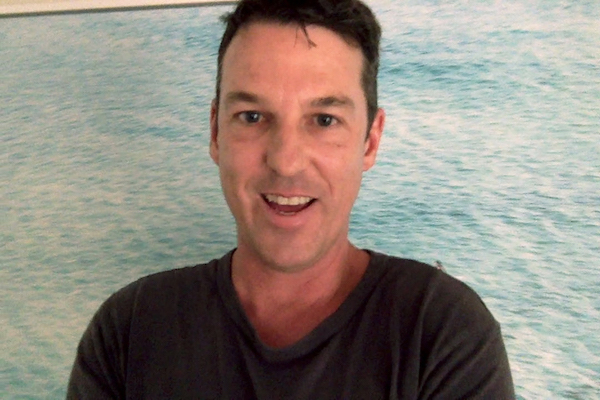 The winners of the Endemol Shine Award for Best Editing In Reality are Jeremy Moore and Dan Hart for their work on ‘Australian Survivor’ season 5, episode 3. They were represented by Jeremy. The ninth Ellie of the night was presented by Scott Rowan from Endemol Shine Australia. 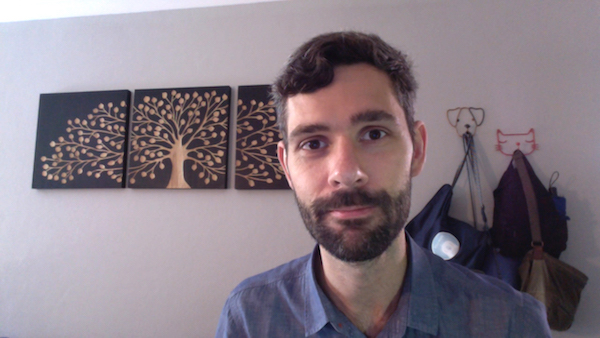 The Videocraft Award for Best Editing in Documentary and Series was won by Philippa Rowlands ASE for her editing on ‘Revelation’, episode 3 - ‘Goliath’. (Philippa was also definitely up for the speech of the night award.) The 10th Ellie for 2020 was presented by James Taylor from Videocraft. 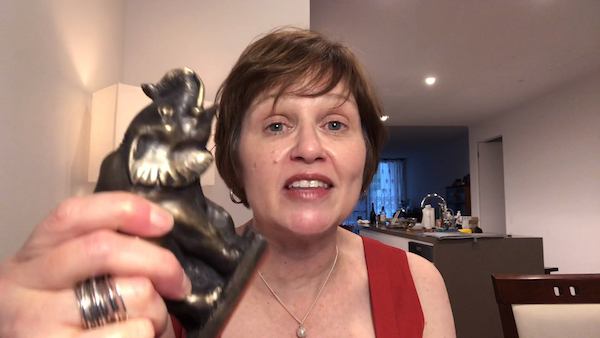 The winner of the Blue Post Award for Best Editing in Drama is Geoff Lamb for his work on episode 1 of ‘The Commons’. The Ellie was presented by Rachel Knowles, General Manager of Blue Post Sydney. 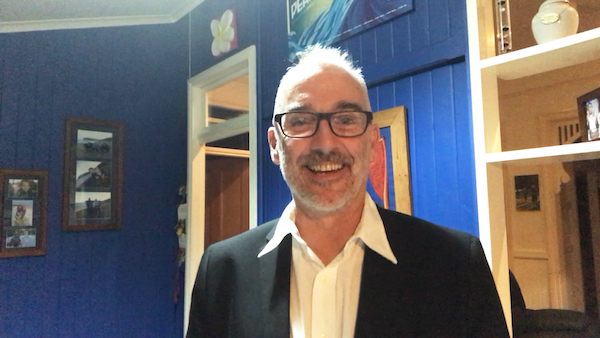 The winner of the Audio Network Award for Best Editing in a Documentary Feature is Lindi Harrison ASE for her editing of ‘The Leadership’. The 12th Ellie for 2020 was presented by Emily Norton from Audio Network Australia. 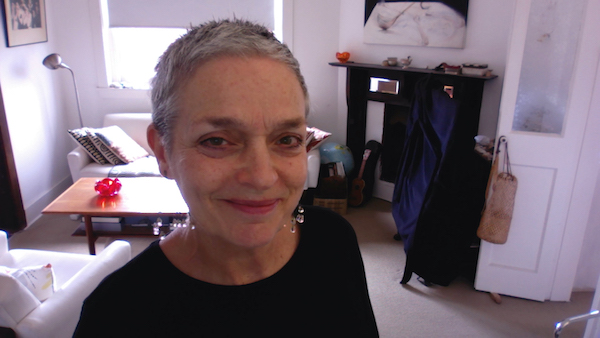 And the winner of the Avid Award for Best Editing In A Feature Drama is Andy Canny for his editing of ‘The Invisible Man’. The final Ellie of the evening was presented by Pip Warren from Avid. 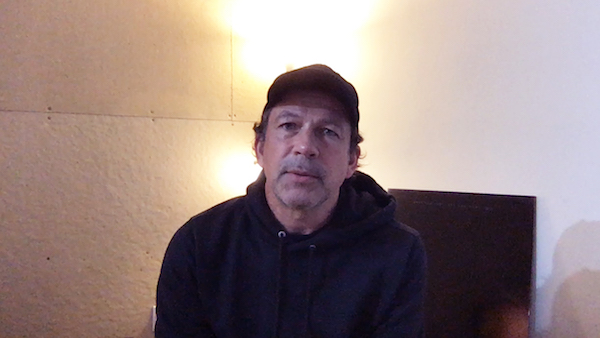 For the last couple of years, the ASE has been trying to encourage more Members to apply for accreditation. This year we were thrilled to recognise the careers and contributions to the editing craft and community of four Editors through accreditation.  Our new accreditees are Orly Danon ASE, Geoff  Lamb ASE, Julie-Anne De Ruvo ASE and Michael Houlahan ASE. Congratulations to our four new ASEs!! 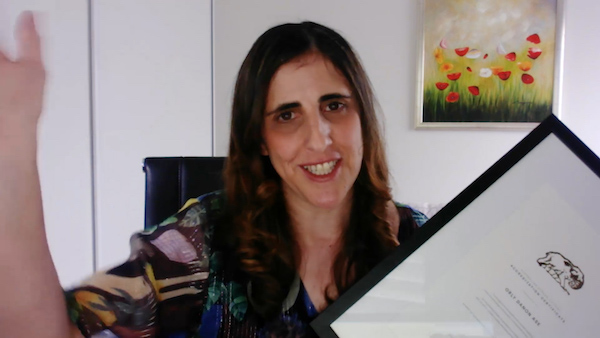 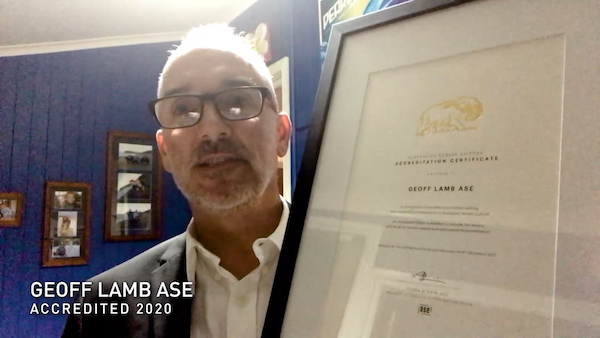 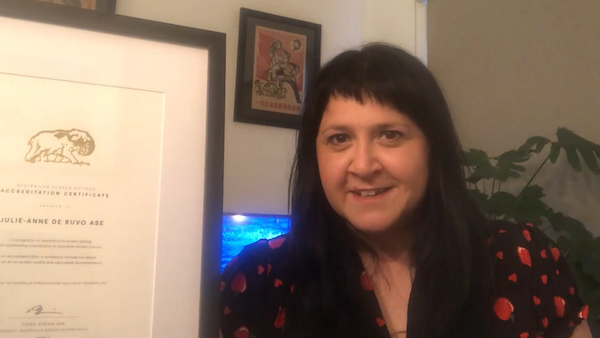 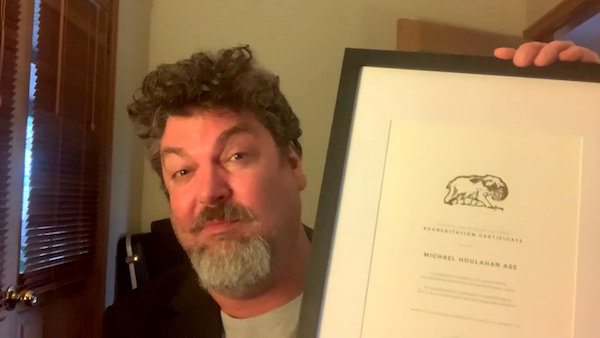 Halfway through the awards ceremony Emily Norton from Audio Network hosted Music Pub Trivia. Players had to put all five answers in a single chat box.  The trivia questions were:

Question 4. Which one of these songs is not featured in a Baz Luhrmann film?
A) 'When Doves Cry' – Quindon Tarver. B) 'Young and Beautiful' – Lana Del Rey.
C) 'Your Song' – Elton John. D) 'The Greatest Show' – Panic at The Disco.

As several people submitted five correct answers, the first person who submitted all correct answers in the one message was the lucky winner. Angela Vic was extremely excited to be the fastest with her entry, and went on live to chat with Fiona and Danielle.  Angela won an Audio Technica Vinyl Record Player worth $300, and an Audio Network Play-It-Back 2020 compilation! 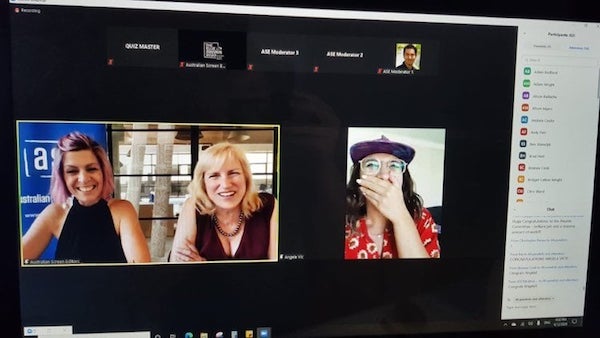 Our lovely sponsors donated some fabulous Lucky Door Prizes. This year the winners were randomly selected from the people who were online at the time of the draw. The winners were invited to come online to virtually accept their award and chat with Danielle and Fiona.

The Lucky Door Prize winners were... 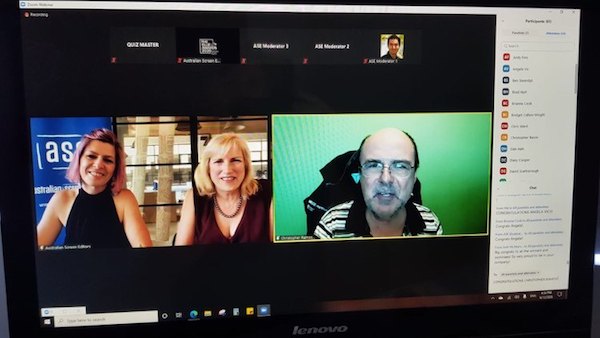 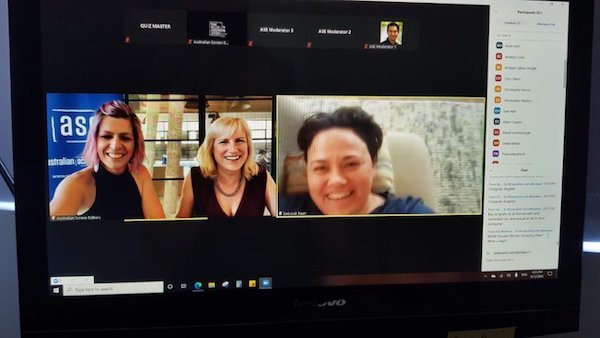 3. Adobe generously donated an Adobe Creative Cloud Subscription which was won by Jeremy Moore! (Jeremy was online but unable to turn on his camera at the time.) 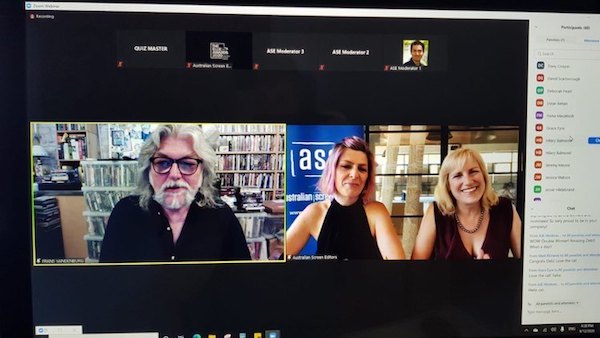 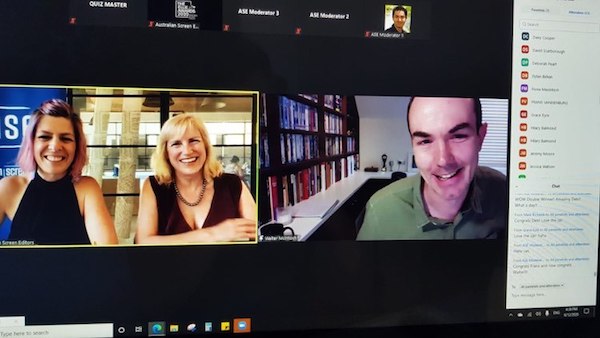 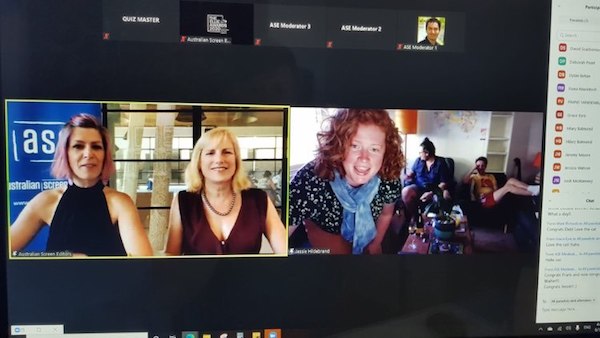 All the hard work paid off and the 2020 Ellies ran smoothly and was very well received (See some comments below.) A massive thankyou to the hardworking members of the Executive Committee, especially  Andy Finn, Timothy Hadwen and Adrian Barac for their editing, mixing, compositing and grading; Fiona Strain ASE and Danielle Boesenberg for hosting and QC duties, and the wonderful Margaret Slarke for background wrangling, organising, checking and QCing. Thanks too to our nominees and new ASEs for gamely recording speeches even though you're probably much happier on the other side of the camera; and to Alison Myers for wrangling and organising all the clips. And of course a massive thanks to Sophia Habib and her team for adapting so quickly and brilliantly to organising a recorded event. 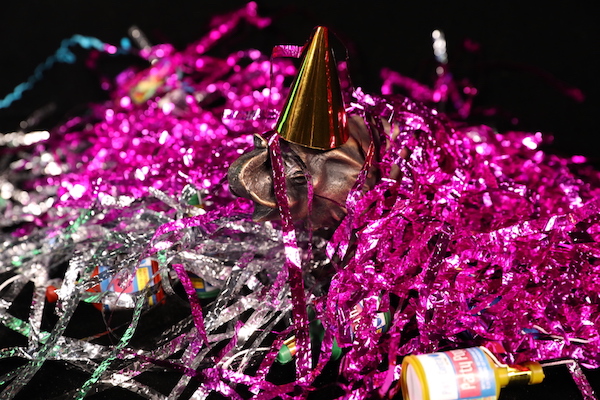