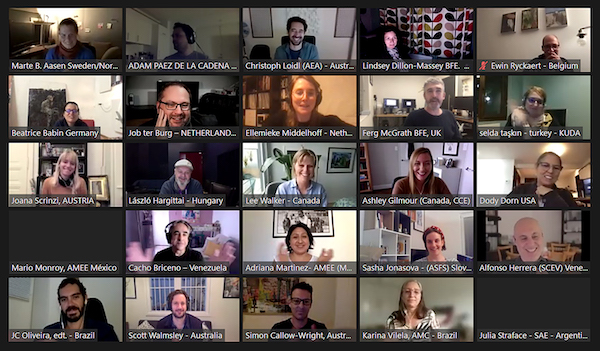 In the early hours of Thursday October 14th I had the pleasure of attending via Zoom the 4th International Film Editors Forum (IFEF). It runs every year as part of the Edimotion Film Festival; Europe’s oldest film festival, which focuses exclusively on the art of editing. I was joined by fellow ASE Member Scott Walmsley, and ASE Vice President Fiona Strain ASE, alongside another 52 Editors from 28 countries across the globe.

(Find the ASE Members among the international Editors.)

Despite the 2am start and the need for a lot of coffee, it was an extraordinary experience hearing from such a diverse group of international Editors. We covered a variety of issues and challenges that we face, including the universal effects of the pandemic on our local industries. With the help of yoga breaks between virtual rooms, the four-hour event went by quickly, and by the end we were all left wishing that we had more time still to chat!

Some key points of discussion from the various break-out rooms included:

Gender balance - female Editors are generally still being paid less than their male counterparts in most countries. Academics from both the UK and Croatia are witnessing more equal amounts of students from both genders. More women are now winning awards here in Australia, but this is not the case in the US. At the ACE Eddie Awards more men are being nominated and more men are winning more awards. Affirmative action is the answer. Kylee Peña Wall of Netflix did a research paper of gender balance in USA - https://twitter.com/kyl33t
https://www.whitehouse.gov/briefing-room/statements-releases/2021/10/22/fact-sheet-national-strategy-on-gender-equity-and-equality/

Work-life balance, mental health and schedules - Editors are turning down work because schedules are being determined by people who have no idea of what goes into the job. Editors work too much! Our experiences enrich us as Editors, but this is catch-22 because we’re too busy working to have experiences. There are numerous studies that highlight the benefits of working both shorter days and a four-day week. Productivity remains the same and happiness levels go up. Rest helps creativity. Younger generations appear to have a much healthier work-life balance. If funders are responsible, producers will need to prove that they have budgeted for mental health.

The International Alliance of Theatrical Stage Employees IATSE strike was happening at the time.
https://www.theguardian.com/us-news/2021/oct/17/hollywood-strike-averted-after-union-and-producers-reach-last-minute-deal.

Wages growth or lack thereof - inflation is surging worldwide and our editing wages are not keeping pace with rising living costs. The impact of this is being worst felt in Africa and South America. Being transparent about our rates with our colleagues helps us to negotiate for fairer wages. 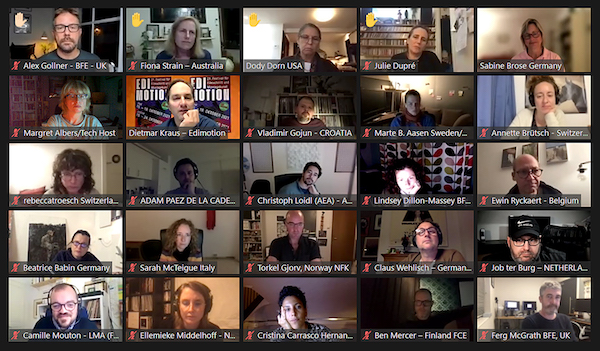 (Can you find all three ASE representatives in the screenshots - Fiona Strain ASE,
Simon Callow-Wright and Scott Walmsley?)